To summarize the entire night; I loved every second of it. Anthony Hamilton gave the audience everything they were hoping for. A close and intimate show with a lot of love and a lot of laughs mixed together to create an entertaining show that will be remembered all through the year and beyond. 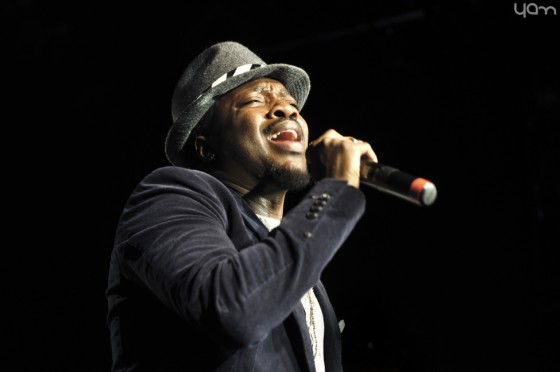 Before the show, very few posters were on the streets of Stockholm announcing that Anthony Hamilton and his band where coming to town, therefore I was kind of surprised that the show sold out and that the ticket pressure was so high.

The hard working soul underdog, Anthony Hamilton, entered the Hamburger Börs stage about an hour late, but to kill my stereotypic view of soul singers as super divas, he actually asked for the audience’s apologies, describing that he wasn’t ready to meet the Stockholm crowd because of heavy expectations… from his side.

Anthony Hamilton plays a southern type soul with influences from old school RnB. He has been compared with many big names such as Bobby Womack and Bill Withers. You can tell that he likes to be on stage because he seems to enjoy every second of it. With warm humor and a deep connection to the audience, there was a special type of atmosphere in the nightclub.

The show was everything you want a soul gig to be: a stage filled with talented people giving everything and more to deliver the songs to the crowd. He mixed old classic songs like Pass Me Over and Charlene with new songs from his latest album Back To Love like Pray for Me and Woo.

Even if Anthony Hamilton was the name of the event, there were never any thoughts of this as a “one-man show” because all the band members playing with Anthony had and an equally big role in the show. However, the backup singers stood out and made me want to place a yellow round smiley mark all over this review — with an arsenal of vocal pitches going from high to low and showing off with dance moves synced with Anthony, they made the show spectacular.

I left the show feeling like a million bucks, and promised myself that I would go to more soul concerts this year. Because if any show this year even comes close to the quality and atmosphere of this one, that show is definitely worth a visit.