Celebrating its tenth anniversary this year at San Francisco’s historic Castro Theatre was the Film Noir Foundation‘s tribute to the darkest of cinema’s corners: film noir.

Noir City X stretched over ten days and showcased rare proto-noirs from Hollywood’s pre-code age to noir classics to technicolor sixties neo-noir. All of which were presented with in the seemingly effortless, and most certainly boozed-soaked, style of the foundation’s founder, the Czar of Noir himself, Eddie Muller.

His efforts did not go unappreciated. Not only was the 1,400 seater theater sold out almost every night, Muller received an award from the Mayor of San Francisco himself for his tireless efforts in saving and restoring American film noir over the last decade. 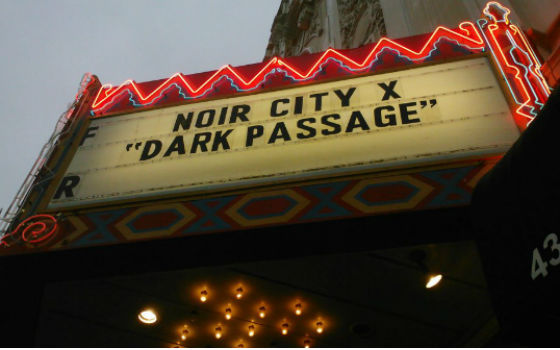 The first night featured two San Francisco-based noirs: the Bogart and Bacall classic Dark Passage and the lesser-seen The House on Telegraph Hill. Before the double feature, there was a reception in the theatre’s mezzanine for passholders that included some rather interesting complimentary libations: Fireball Cinnamon Whiskey. I’ll just say it was… interesting. But who can say no to free whiskey?

The second day started with a pair of obscure and not-on-DVD pre-code proto-noirs: Tay Garnett’s Okay, America!, featuring Lew Ayres, and Edward L. Cahn’s Afraid to Talk. Both were interesting looks at corruption and honor during prohibition-era America, and while neither is true noir, their legacy can be felt later on in the era.

After the afternoon matinee there was a reception for guest of honor Angie Dickinson featuring more free booze — this time, Four Roses Bourbon (because nothing says noir like a bourbon on the rocks). Ms. Dickinson was incredibly nice when I talked with her. She’s still sharp as a tack and wears eyeliner any chance she gets.

The actress was present to give a Q&A (excerpts can be read here) in between screenings of the neo-noir classics The Killers and Point Blank, both of which co-starred Dickinson and ultimate badass, Lee Marvin.