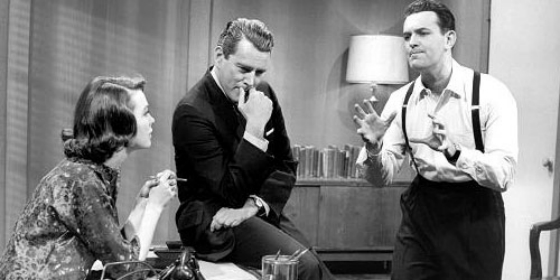 In discussions and debates comparing movie and TV quality, there is a trend toward disregarding any American television aired before HBO produced original programming. Yet one offering from the 1950s tradition of drama anthologies successfully brought to the screen a story that movies have tried but failed to film.

What Makes Sammy Run? is a 1941 novel by Budd Schulberg, adapted by the author and his brother Stuart Schulberg into two episodes of the drama program Sunday Showcase in 1959. It chronicles the rise of ruthless “human dynamo” Sammy Glick, who steals work and tramples people in his path to success. It’s a high quality production for the time, with a great cast and outstanding rapid-fire dialogue. Steamier themes could only be hinted at within this timeframe and era, but a few risqué elements remain that might surprise viewers who associate 1950s TV solely with Leave It To Beaver morality. The first episode’s opening framing device might come off as too obvious a title drop for modern audiences, and one writer’s attraction to Sammy is initially more explained than shown. These faults can’t detract from the overall power of the program, with its dynamic and unflinching critique of Hollywood sparing none of its characters from judgment.

While numerous film versions of Schulberg’s novel have been announced over the decades, none have emerged past pre-production. Only on stage, where adaptations included a musical and TV, with one single-hour adaptation aired before this definitive 1959 show, has this story about an audiovisual medium been told in an audiovisual medium. The movie industry has made plenty of films criticizing their industry. What makes Hollywood run from Sammy’s story?

For more information on What Makes Sammy Run?, its influence, and its failed movie adaptations, check out these sites:

whatmakessammyrun.net: Sammy is a TV Pioneer

LA Times aarticle: The many faces of Sammy Glick