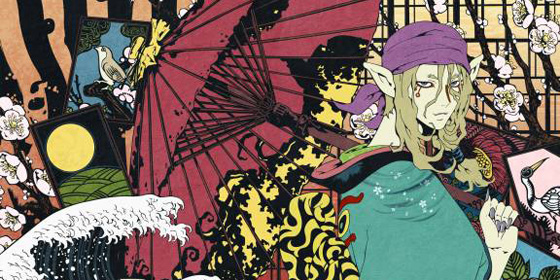 First aired in summer 2007, Mononoke is a twelve-episode series organized in five story arcs, each centered around a different mononoke (legendary Japanese occult creatures). The five title arcs are listed as follows:

Each arc stands alone and presents a new set of characters in different settings and sometimes different eras. The only common thread is the presence of a nameless character called the Kusuriuri, literally the Medicine Seller.  The Kusuriuri is no ordinary merchant. Ageless, nameless, and seemingly disinterested, he travels across land and time to unravel and destroy the ties between the mononoke and their human victims.

Mononoke is a feast, both for the eyes and the mind. Visually, it is the most impressive anime series I have ever watched. The art is strikingly beautiful. The animation is unique and reminiscent of Kabuki, classic Japanese drama, both in terms of structure and sound editing. Watching felt like turning the pages of a precious picture book, each leaf splashed with a wealth of colors and cultural references.

Story wise, Mononoke is anything but a simple depiction of folklore. Complex themes of love, hatred, persecution, jealousy and revenge are presented and each finale leaves a lot of room for interpretation. The Kusuriuri himself is an ambiguous character that remains an enigma throughout the series.

I strongly recommend Mononoke to anyone looking for a different anime experience.  The best thing about its episode structure is that you can select a specific arc without getting lost or missing anything. This makes it perfect for re-watching.

PS: If you decide to give it a try (as I know you will), please come back and let us know which arc you preferred.