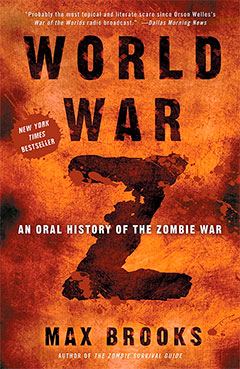 World War Z is my favorite piece of zombie literature. Let me tell you why.

As the subtitle of the books says, this is “an oral history of the zombie war.” But this is not big overview of how this fictional event happened. This is a collection of individual stories from all over the world and from different kinds of people, from the beginning of the pandemic, going through “the great panic,” to the ending of said war.

While there is no protagonist, the story does have a narrator, an agent of the United Nations Postwar Commission, who interviews (and compiles) many people of different backgrounds and levels of “importance” for the zombie war. In the introduction, said narrator explains that there was an official report with all the data gathered from the interviewees, but while the report was proper, full of facts and figures, he felt he “couldn’t let these stories die.” And so his boss told him to “write a book.” And so he did.

The first story begins in China, where a doctor tells us how he met what will be known as “patient zero.” A young boy who came back alone to his small town after he went out with his father. After that we see through many accounts how China failed to contain the infection, and how it spread around the world via refugees and organ black market.

As you can see from that, while World War Z features zombies, it’s really a sociopolitical commentary. These interviews are set about a decade after that fictional zombie war officially ends, and the world changed a lot. Not only in terms of geopolitics and socioeconomics but also the climate and ecosystem are different.

Through all these stories we see the different ways the governments managed (or failed to manage) said crisis. How paranoia, isolation and even being used to bad situations worked for some countries, while the over-confidence of others were their doom. We don’t only see it through the eyes of those who were in charge, but also from the soldiers’ point of view, and even the citizens’. We saw how some had to betray their moral code and how others adopted a new one; how others tried to give others hope and comfort, and how ruthlessness was needed sometimes. We saw all the different ways people managed to survive and, in that way, we also saw the best and worst humanity had to offer.

And the characters themselves were so varied. From all economic and social standings, men and women, young and old, of all races, even disabled people. In fact, I wish Brad Pitt didn’t have the rights for the book, just so we could have the adventures of “The Hibakusha and the Otaku, Warrior Monks.” Yes, that happens in the book.

Check out our review for the 2013 film adaptation of World War Z here.