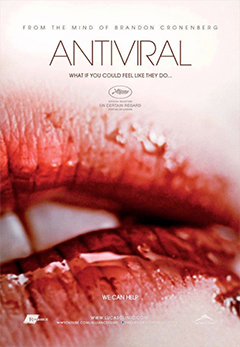 All hail Brandon Cronenberg and his debut feature Antiviral, a film that not only proves the idiom “like father, like son,” but shows that the son of the master of body horror has got a whole lot of talent.

Caleb Landry Jones stars in Antiviral as Syd March. Syd works for a company that peddles live viruses of celebrities to loving, obsessive fans. He also helps supply the viruses to piracy groups, until he becomes infected with a disease that kills star Hannah Geist (Gadon). While suffering from the illness that left her dead, he must discover how to cure himself while keeping his secrets hidden and facing threats from almost everyone he knows.

“I understand your fascination with her. I understand completely. She’s perfect somehow isn’t she? More than perfect,” March preaches to his clients. Landry Jones embodies everything that Cronenberg is trying to push through in his character in one hell of a performance. It’s a quiet performance, but a beautifully tortured one that doesn’t hesitate in adding to the film’s unsettling atmosphere.

Brandon Cronenberg does his best to bring forth something that works on multiple levels, and boy does it ever. The minimalist feel runs rampant, with white, black, and red being the most notable colors, but it never feels cheap in any way. Each scene is as stylish as the last, and there’s always a sense of danger lingering in the air.

While needles, isolation, and blood provide plenty of the film’s horror chops, there’s one hallucination scene that makes one hope that Cronenberg will be taking a dive further towards his father’s work than he already has. The scene is simply but impressively executed, and it might leave a few individuals who have actually seen it wondering if our writer-director has seen Matthew Barney’s Cremaster 3.

One of the things that Antiviral does best is address the idea of obsession. While the news reports on who’s doing what get a little repetitive, the idea of selling celebrities’ illnesses, and even slabs of meat grown from celebrity muscle cells, is totally disgusting. It’s a clear commentary on the way humanity involves themselves so much in the lives of the rich and famous, and how the right marketing can work on the strongest of individuals.

People expecting something exactly like some of Papa David Cronenberg’s less subtle works will obviously be incredibly misled when walking into this, but the fact of the matter is that Antiviral is pretty top tier stuff. It works as body horror, slow-burning thriller, and social commentary on the state of society’s obsession with celebrity, and is a damn fine feature film to start a career off with.