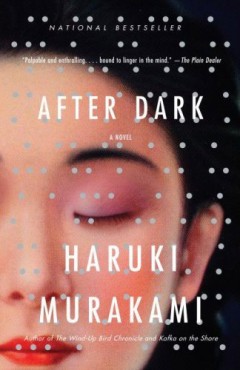 Haruki Murakami writes as though he’s remembered every single dream he’s ever had. Not only does he remember them, but he visits them freely, trims their hedges, contemplates their form and color, and even brings back small trinkets and souvenirs.

One such postcard from nowhere is After Dark, a novella spanning the course of one night and many lifetimes. In it, Murakami masterfully concocts a tale of everyday minutiae with a healthy splash of fantastical suspense, topped off with a twist of hard-boiled crime, and garnished with some supernatural angst — shaken, not stirred.

A fast-paced urban landscape becomes a night market of wonders and trivialities, witnessed by 19-year-old Mari, who is struggling with a mystery of her own. Her troubles are revealed bit by bit as she gradually opens up to new friends by chance.

This story is one with unanswered questions and wrongs gone unpunished, which would be frustrating if Murakami didn’t leave us with the sense that this was only one night out of an endless many. After Dark materializes out of the ether, whispers into your ear, then vanishes into the morning mist, leaving just a scent of perfumed hair.

For those who haven’t had the pleasure of sinking into the embrace of Murakami’s whimsy, this novella is a great introduction. There are, however, a few stylistic liberties taken with After Dark that might make it difficult to read. For starters, the sense of incompletion might come across as exasperating rather than alluring. The side characters tend to be as sparsely described as props in a play. The camera direction by the omnipresent narrator (“Our viewpoint takes the form of a midair camera…” reads Chapter 2) could be winced at as stilted — or worse, interpreted as passive-aggressive innuendo for a movie deal.

Though After Dark has its faults, it has just as many charms. It beckons us to cast our gaze toward the world outside on a sleepless night. It seeks to thrill and intrigue with ordinary problems during extraordinary circumstances.

Have you ever wondered where your spirit gets to when you dream? That might just be one answer you can find in these furtive fabulous pages.