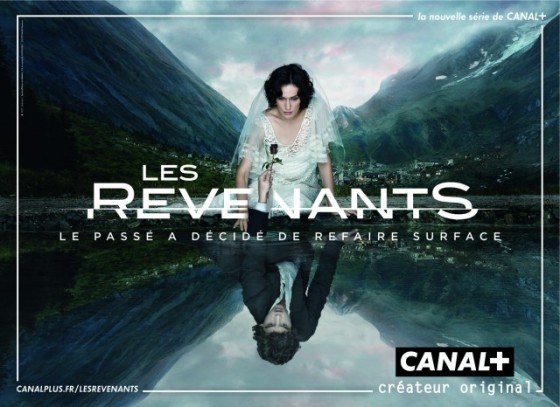 More corporeal than ghosts, more conscious than zombies, Les Revenants [1] trickle back into their French Alpine hometown, pursuing agendas unknown. This television series expands and even improves upon Robin Campillo’s 2004 film of the same name. The revenants of the television version initially seem more human than their movie counterparts, but soon start to display shared abnormal traits: ravenous and bizarre eating habits, superhuman endurance and knowledge, and strange powers over lights and vision.

The tone of the series often sets up drama with a lull into dread. Dynamics in the town slowly unfold before the viewer as we follow the revenants back into the world. Episodes deftly balance scenes between the many characters, and with a mountain village as small as this one, storylines eventually merge. Scottish post-rock band Mogwai provides a fitting spare soundtrack to compliment the cinematography’s elegance. Mundane appearances are suddenly broken by shadow, trapped by sharp curves and angles and quite a few spiral staircases. The many giant windows and other panes of glass are convenient for viewing people inside and outside a home, furthering the voyeuristic approach.

Creepy and captivating as Les Revenants is, there are soap opera moments that almost snap the series’ taut control. Then again, this show eases one into a story filled not only with the risen dead, but also a cannibalistic serial killer, psychically connected twins, and a medium who can commune with the spirits during sex. Everything works because of the time taken to situate all the personal connections. Sudden jolts, revelations, and reconciliations may provoke audience gasps and tears. All the lives of the living are shaped by loss, and both the living and the dead make attempts at redemption and closure. Yet what the dead seek may threaten the living.

Reputedly the most-watched program ever produced by Canal+, Les Revenants will return for a second season in 2014. An English-language version is also in the works, headed by State of Play and Shameless creator Paul Abbott .