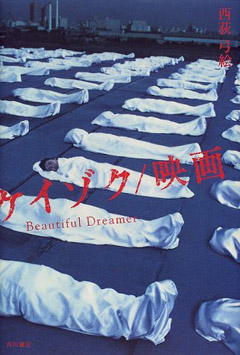 Keizoku — Beautiful Dreamer is a Japanese film following the series of events depicted in the series Keizoku — which you SHOULD all watch — and subsequently in its TV Movie, Keizoku Special: Phantom. So be warned, to actually get what’s going on in Beautiful Dreamer, you would have to watch the 11-episode series, at least.

After a terrible experience during the series that made Detective Shibata Jun (Nakatani) have a heartbreaking — yet equally hilarious — case of post-traumatic amnesia during Phantom, which were followed by even more terrible things, Shibata is waiting for Detective Toru Mayama (Watabe) to finally recover from all his injuries.

Informed that she’s been named Chief of Sector 2, the unsolved cases unit, she replaces her protective now ex-Chief Kotaro Nonomura (Ryu). He’s getting his retirement payment cut by a couple million Yen, which prevents him from divorcing his wife and getting hitched to the evasive Miyabi-chan.

The eager Shibata takes on a mysterious unsolved case from 15 years ago involving a shipwreck and the mysterious Yakujin island, which was owned by the Kirishima family who died in the incident. Now, their orphaned daughter, Nanami (Koyuki), is arranging a dinner to eventually find out who was really to blame for the death of her parents.

Very much like the series, Beautiful Dreamer revolves around Shibata Jun, the incredible klutzy but amazingly assertive genius. We are also trying to figure out the mystery of the plot — not only who did it, but how and why. There might be one or two surprises in store for viewers. However, Keizoku: The Movie begins moving towards metaphysics — which is a focus on Keizoku 2: SPEC — as Yakujin island is said to be the gate to the underworld. And weird things do happen.

The on-going plot from the series continues as a sub-plot with Asakura, who might be dead — or not — returning as a hallucination or a mind-bending memory including ex-detective Kunio Tsubosaka (Izumiya) in one of the most deep dialog-driven scenes of the whole movie. Would you be able to shoot someone you love if that meant finishing off someone you hated?

Overall, Beautiful Dreamer isn’t at the level of Keizoku. It seems like an extra long episode of the show with an extra nice touch because of the budget. It’s got some very beautiful shots — like the one with Miki Nakatani’s face floating in a pool full of blood with a shimmering reflection on top of it. Enjoyable as a continuation of the show, but if I had to recommend the series — stick with Keizoku and Keizoku 2: SPEC.