This is something that YAM Magazine appreciates because that is also what we’re trying to achieve, to break boundaries everywhere.

Yes! But at the same time it’s starting to become more and more difficult to keep it up. We try as best as possible, and also sometimes think up our very own concept and set the framework for what we are presenting. With Selam Sounds we are trying out this new mix, this concept with these artists, with this unit and this DJ — it might sound like a clash at first, but it might work, why not? We aren’t just trying to keep up with everybody else, but we are trying to present new alternatives to socialize and combine music. 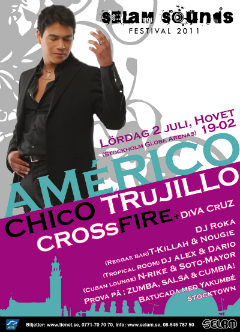 So how was the idea for Selam Sounds born?

Two people from the office made a scouting trip to Chile. There we saw a lot of interesting groups that we thought would fit here, not just for the Chilean audience but for the Peruvian, Swedish, and Bolivian. These were really cool artists. We saw several concerts live, and we started to play with an idea to start a summer festival in Stockholm based on the different rhythms that we liked — Reggae, urban, African, Latin. Our ambition was very broad from the beginning, but we are working with limited funds so we can not book everything that we think is fun.

Then we started to look at what is possible to book at all — looking for what the audience would be interested to see. That’s when we started to find a strong South American track based on the Cumbia rhythm, very largely a Hispanic audience, but not limited to artists who are becoming international from Chile, but that still span over boundaries — like our two headliners, Americo and Chico Trujillo. They are our headliners, then we wanted to decorate our festival with more things: we have a Salsa dance floor, a reggae bar, our special guests plays hip-hop and dancehall, we will have Samba with a Batucada group. We hope this will be the starting point that can be developed further

I would hope so. It would be really great if this could become an annual festival.

Do you have any plans to bring in music from other continents? Have you started looking into Asia for example?

We haven’t done anything as far as Asia. Then I would also want to say that we also work with Swedish artists. We have worked with artists such as Adam Tensta, Timbuktu, Calle Real, artists that are local and that we find are talented. We set very high standards of quality and professionalism. We would like to support the local groups that we think fit our profile. There it is open to all, there’s so much that is going on right now. It’s not that we want to lock ourselves too much on the geographical, but to answer your question, we have not done anything purely from Asia.

But we will have an artist from Egypt in the fall, we will also have an artist who comes from Germany, but who has Nigerian roots, so it’s becoming more and more merged. This artist from Egypt, named Hakim, he has done many collaborations with several international artists, among them Latin American artists. Many of the big names that we present have often done collaborations with hip-hop artists from the United States or a reggaeton artist from Puerto Rico, or they have been interpreted by others — Salif Keita has been remixed as a house version that is played for an European audience in clubs.

We try to be open minded and not lock ourselves in geographical maps. We find that there’s still music that is worth fighting for, to highlight in Sweden, to take it to Sweden, just because it is difficult to bring them otherwise. The Anglo-Saxon culture in Sweden is very strong, rock and pop culture is clearly dominant. Music in English and in Swedish, they take much of the audience and attention. We do what we can to introduce new bands that stand for an alternative.

That’s really amazing, you are doing a great job so far. I hope that Selam Sounds does great, and I shall see you on July 2nd.

You can find more information about the event on Selam’s official site. You can also find the event on Facebook.

To our Swedish YAMmies: Stay tuned to YAM’s facebook page. We will be giving out two tickets to Selam Sounds!