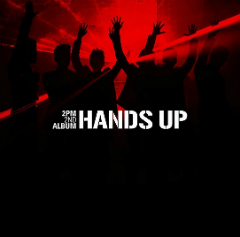 Seems like it’s going to be a fun and hot Kpop summer. Many groups are releasing new material and with this release, I was extra excited.

I won’t deny it, I’m a 2PM fan. But with previous reviews I’ve done of their releases, often I have been slightly frustrated. If it has been an issue with the themes of their songs, to the schizophrenic sounds — too many times have I wondered why the hell I’m even a fan. But there’s something about 2PM as a group, plus the fact that they must be one of the best produced groups in Korea. Their tracks are always well done. Music that makes you want to jam. I’ve said it time and time again: JYP knows how to make that mainstream music — but so does SME and YG, so as a Kpop fan you are pretty much screwed (because as a rabid fan, you end up buying way too many albums).

Hands Up has the possibility to be a home-run, but it’s sadly blocked mid-air because it consists of singles that 2PM released last year. All the new tracks on the album are a great evolution in the 2PM sound — it’s sexy, has a club vibe, there’s a little bit of r&b and it’s a little gangsta. Finally, 2PM gets it right all around.

So it bothers me that the rest of the album is full of songs that really don’t fit to the overall feeling of it all. If only Hands Up had been a mini-album then it would have been one of 2PM’s best since 2:00PM Time for Change. But alas, JYP does it again, filling an album with old singles. Why bother? If you are going to be lazy about making an album then don’t call it that. Kpop has made an industry of mini-albums and I must say that it works perfectly fine.

I digress. The first six tracks of Hands Up are going to be playing non-stop in my iPod. Right now it’s extra fun to be a 2PM fan.

Preview it on Xiami.com | Like it? Buy it at Yesasia.com