We at YAM Magazine love everything that helps open the borders between cultures, as well as helping people discover new things to love. That is why I was pleasantly surprised to find out about Make Musik Stockholm – a one-day festival that aims to take over the streets with music and lets artists be heard.

So I sat down with this year’s festival coordinator, Lara Szabo Greisman, to ask her about what Make Musik is and what we can expect from this year’s version of the festival. 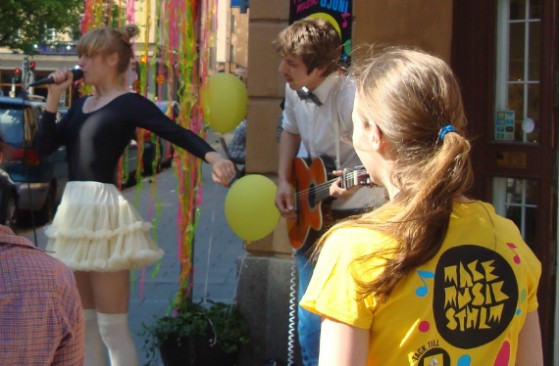 Seeing as I am so new to this and I am sure some of our readers are as well, explain to us what Makes Musik Stockholm is. Can you give us a general description of what the festival entails?

Well, pretty much the core of MMS is that it’s the Swedish version of Fête de la Musique. I think that that is a concept that is beautifully contagious – in which the idea is that for one day of the year, musicians get to take over the streets. This concept now exists in over 350 cities all over the world. Since we are in Sweden, the concept must be customized for the context that we have here. Which means that as many local musicians as possible, and I think that 98% of the acts this year are going to be local, up and coming new musicians, loads of coordination – also with the Studieförbunds (study organizations), which is a very Swedish phenomena. So we are working with Kulturskolan, Studiefrämjandet, ABF, as well as Vuxenskolan and Sensus. It’s all very exciting.

What that means is that this can happen via collaborations – so we are collaborating with the venues. By venues we mean, because the stages are anywhere through the streets, a venue can be a café, a shop, a restaurant – nothing is too big or too small. So what the concept is is using these collaborations, connecting with the musicians and these venues to create a city-wide festival in which musicians can play anywhere they want. So it’s very much a festival for the musicians and for people to discover new musicians to love.

This is the third year the festival is being held here but the first time you are coordinating it. What is the hardest thing to do as a coordinator?

[laugh] The thing is that because the festival is for a city it’s just how large it really is and needs to be. Also how unpredictable that is, so you are pretty much juggling with invisible factors and dreaming big.

With the French concept, when did that start?

So it has been going every year since?

It’s massive, it’s really insane! I really recommend for anybody to go there if they can. It’s on the 21st of June, it’s always on that day. We wanted to do the Swedish version on the 21st, but with Midsummer (a Swedish holiday) it’s impossible [seeing as many Swedes prefer to spend that holiday with their families away from home]. 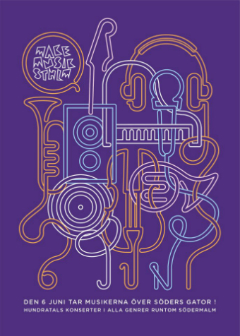 Me personally, I hadn’t heard of this concept before. I accidentally stumbled upon the Swedish version last year. When you tell me that it’s done in 350 places around the word all I can think is: how, where, when?

Exactly. It’s called different things in different cities – I think that in Berlin it’s still called Fête de La Musique, in New York it’s called Make Music NY, in Brisbon it’s called Make Music Brisbon. It really changes from place to place. It’s not important what the title of it is. It’s just that momentum. It comes from a heritage of street festivals, of having open performances where people really can have these cultural manifestations in the streets. But this particular model [the Swedish one] comes from the French idea.

How did it end up here in Stockholm?

Actually, that is a pretty funny story. The former coordinator, Alice, she brought it here when she began working as a cultural attache (specifically in music) at the French embassy in Stockholm. This was two years past. She brought it as a project that she would do in her portfolio. It was very much anchored in the French embassy in connection with the Alliance Francais and the French Institute. The first year it happened, I don’t remember the exact date, but it happened around Stockholm Love (when crown princess Victoria got married). So I can imagine that it was very challenging, and it rained! Which it won’t this year, at least we are hoping so. It was very challenging because of the amount of security that happened during the royal weeding. It was a huge challenge for her, but she got it off the ground and they hosted 40 concerts throughout the day. Last year we had 100 concerts during the day and this year the goal is 300 concerts.

The thing that is so different this year is that we have moved out of the embassy. We still have the connections but we are also linked to several other cultural institutes. We are trying to make the festival a very local affair, as Stockholm oriented as possible.