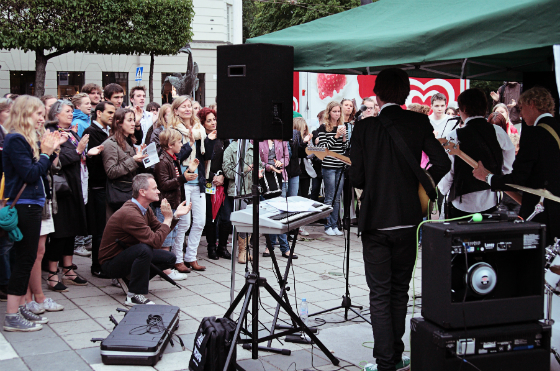 Concert in the middle of the streets of Stockholm.

This year’s festival is being held on the 6th of June and you are in the middle of planning, but are you already planning for next year?

In a way, yes, of course! It’s difficult not to, you know?

But there is no central organization for Make Musik Stockholm, right?

Actually, we are a non-profit organization.

Is there one for all the festivals?

No, there isn’t a global one. Just the one here in Sweden. For that we have – it’s a pretty typical structure where we have a board of directors, except for this one crazy thing where our members are anyone that wants to be a member or anyone that participates. So we have a second challenge in handling the most giant membership ever, when we have our annual general meeting – which is held in September. That is when the next festival coordinator will be elected, and if everybody comes, which they are all very welcome, then we might need to get a freaking amphitheater to host them all. Which could be cool, or insane, but we shall see.

What can we expect from this year’s Make Musik Stockholm?

You mean highlight-wise? Well, something that I am excited about, specifically is… it’s so hard to chose. It’s like picking my favorite child!

Ok, let me make it easy for you: who’s playing?

Many of the bands from last year are joining us this year. Should I pull out a list? Wait, I should probably just go through the map in my head because that is easier. In Hornstull we are going to have a dance and techno area; in Långholmen we are going to have a Metal Island. In Slussen we will have more world music there, we are collaborating with Stockholm Stadsmuseum and Debaser Slussen. The thing is that the festival doesn’t need to be divided by genre. It would be better if it wasn’t. But continuing on with what will happen this year, we are going to have a Samba workshop, which is a huge highlight. People that have never played samba before, to give them an opportunity to do this during a three-hour workshop that is covered fully by the festival. All the instruments will be there and Samba Rrriot will be holding it. This will be followed by a parade that is going from Flatbuksparken all the way to Mariatorget.

So there’s going to be a lot of festivities going on?

That’s the thing. We are going to have workshops, happenings, concerts all over the south part of the city. It’s very much an extravaganza.

An extravaganza in music and love!

Yes, loads and loads of love!

For more information about this year’s Make Musik Stockholm festival, check out their site over at: www.makemusiksthlm.com