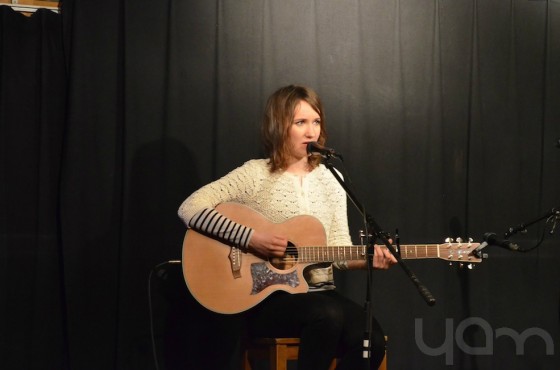 I was invited to this release party by the CEO of Swedensongs, so how could I really say no? Just a few days before I received some of Lovisa’s songs in my mail. I heard them and liked what I heard, so with a little curiosity I walked up to the Big Ben pub.

Lovisa is a very shy artist. When she was introduced to me she almost didn’t look me straight in the eyes. I wanted to ask her some questions, anything to perhaps add a quote to the text. But she seemed so afraid that I was afraid I might disrupt her too much. So I just watched her. I watched her as she was very focused watching her opening act, Cornelia Adamson — who, to me, quite stole the show.

Surrounded by her friends, Lovisa started to loosen up. She seemed happy and relaxed. She pretty much surprised the audience when she just went on stage and said that she was going to play. Just like that, no introduction, no small talk, she just went.

There are many singer/songwriters here in Stockholm. There are so many that I sometimes get sick and tired of them. But there are times that one or another just really pops out — be it via their music, via their charm or sometimes their humor. You always need that little extra to stand out among a huge crowd. I really want to say that Lovisa has it. I can see something lurking behind her sombre eyes. There’s no denying that she is an amazing composer, all her songs are very pretty and nice. She has a very special voice and you can sense that music is what she burns to do. Yet that fire isn’t out to full bloom just yet.

Lovisa is pretty much an artist in the making. This gig is not going to be that memorable, but it will be a great reminder of where she came from. I am sure Lovisa has a long road ahead of her, but I also know that along that road she is going to start to shine. I mean, if it weren’t for the fact that I can see something inside of her, I wouldn’t be bothering writing this review nor planning to go to her next gig.

You can listen to Lovisa’s music on her Myspace or visit her official site for more information.