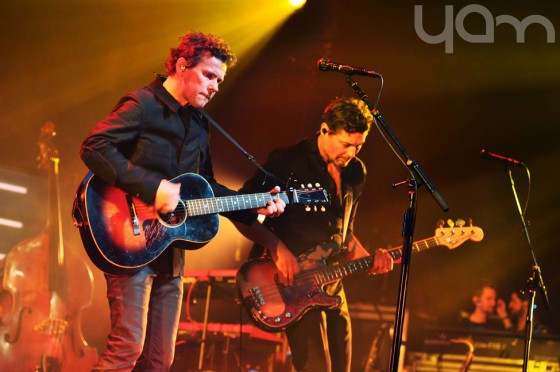 Bo Kaspers Orkester — Bo Kasper’s Orchestra in English — also called BKO, has been around for a while. I believe it is hard to find a Swede who doesn’t know about this jazzy pop rock band. They have just released their tenth album called Du Borde Tycka om Mig, roughly translated to You Should Enjoy Me, and is touring Sweden to promote it.

They played their second sold out show at the Cirkus Arena in Stockholm without an opening act. Instead the six-man orchestra played for two hours straight with no pause. Before the show I had mixed feelings about the way all was organized since I was not sure if two hours was too much for people, but later I was proved wrong. People came to see BKO and that was enough.

The whole show had a respectful and almost disciplined feeling about it. The band took the stage at the exact designated time and ended on time. The crowd showed the same type of respect for them as well; they applauded their extraordinary solos and sang when singer Bo Sundström asked them to sing along. The best thing about a band like BKO must be that the band consists of very talented musicians. Every band member seems to know every instrument they had filled the stage with. For instance, Fredrik Dahl who plays the drums, also played the Citra guitar. Bo Sundström who is the lead singer, played guitar, piano and trumpet.

The set list consisted of both old songs and new songs from the new album like — the lounge sounding song Snart Kommer Natten and the jazz-pop song Jag är Vacker Ikväll. These songs fit like a glove to the band’s current style. However, judging by the crowd’s screams, many had come to see and hear the classic songs performed. Songs like Undantag, Fyrarättersmål and Vi Kommer Aldrig att Dö led to increasing cheers, and I have to admit that even I had some goose bumps on my skin after some of the classic songs.

Bo Sundström talked a lot during the songs, and this became a big part of the performance since he presented the songs with a short story or a joke before they started playing. This made the show feel a little bit more private and was certainly a positive thing. BKO has always been around, always felt fresh somehow. Maybe this is the reason why they are one of Sweden’s most respected bands nowadays.

I guess they will continue being respected for more years to come, and it will not be the last time I see them around either.