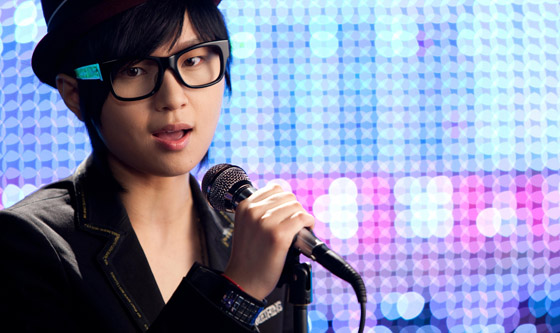 In fact, Bibi just had a sold-out concert recently.
Really? Wow, there’s so many people in China. Concerts do really well, right?

They’re actually getting bigger.
So now you got that on TV, like Idol and stuff.

Yeah, and now with the Internet. Everyone is uploading everything. You can find anything from around the world.
Yes, it’s crazy.

For instance, I saw an interview you gave to the Eurovision Song Contest in Moscow last year, where you talked about the inspiration behind Celine’s Because You Loved Me, about the support your father gave you to become what you are now.
It was a chance to thank my dad for believing in me.

We all want to become writers or songwriters at one point in our teenage years, but when and how did you know you wanted to do this for real?
I just knew that was what I wanted to do, you know? And I started doing it, I was a kid making up songs in the guitar. You know, I just loved it. It was an escape, it was fun.

How did you get to work?
I went to see music publishers, eventually I got fine and I did a song called Rhythm of the Night.

Oh, yeah – the song you mentioned in the Eurovision interview, where you talked about the guy from Russia who knew no English, but knew the songs.
Yeah, that was like 20 years ago. The translator asked me what songs I had written, so I sang a part of the song, and the Russian kid went “Ah, DeBarge – Rhythm of the Night” – That was so cool. There’s this thing like I’ve said before –

Like music is a language.
Yeah, it is. Music is an international language, no doubt. You know, a lot of my songs do well all over the world, which I love because it’s not just for America, I want my songs to be heard everywhere.

YAM Magazine ran an article about international artists crossing over to the American music market with songs in English, in which we wondered why they even needed English, when the music was already great.
But it does help to speak English here.

Why do you think that is?
Because it’s the language here, otherwise no one would understand it. Every now and then something that isn’t in English –

Like the Macarena.
Yeah, exactly. Even Livin’ La Vida Loca was in English. It just, it makes sense.

Well, we’re in the year 2010, everyone’s listening to music online, and everyone is exposed to all types of music from everywhere in the world where there’s an Internet connection. Where do you think the future of music is heading?
I think the future of music is heading where good music is still gonna have to be great, no matter whether you get it on the Internet, on your watch, or on your shoe, or if it comes out from the microwave.

Have you heard about other Asian artists besides Bibi?
No, I haven’t done much research, but I do know a lot of people sing my songs. You know when someone does a song, or someone wants me to hear about this artist, that’s when I check artists out.

I know you’ve done music for Sandy & Junior, and RBD.
Yeah, I’ve done stuff for so many people, it’s hard to keep track.

You’ve also wrote songs for Ricky Martin… Gloria Estefan, Jon Secada. You’re actually pretty big. You talk to people, and they know your songs, even though they don’t really recognize your name.
Yeah, that’s nice. I like that.

So you’re very famous, in a very-
in a very un-famous way. It’s nice, I don’t mind that.

Yeah, kind of like voice actors.
Oh, yeah. When they know your voice. They don’t always recognize you, I mean, some people recognize me, but they recognize my music more than me.

Yeah, but you still are the inspiration to tons of aspiring songwriters who grew up listening to you, do you have any words of encouragement for them?
Just keep doing it, keep writing songs, just… keep working. I kind of work every day, you know? It’s all about the work, working hard, and doing great work.