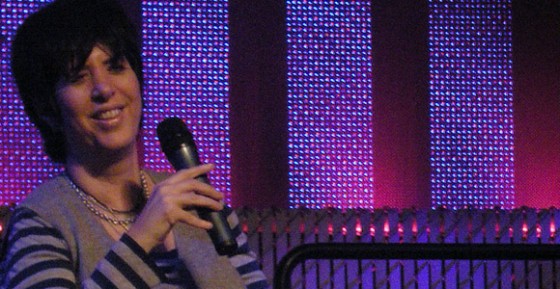 Wheneverver I think about Diane Warren, the first five songs that immediately pop in my head are Aerosmith’s I Don’t Want to Miss a Thing, Aguilera’s I Turn to You – though I recently found out it was an All-4-One song first – Toni Braxton’s Un-Break my Heart, LeAnn Rimes or Trisha Yearwood’s How Do I Live, and Celine Dion’s Because You Loved Me.

Though, Warren’s list of songs and hits are more than a couple of hundreds, including translations of her songs into Spanish, French, Portuguese, and Japanese. Warren’s name may not be easily recognized, but her songs and sounds have been heard around the globe.

YAM managed to chat with Ms. Warren in honor of the release of Chinese singer Bibi Zhou’s (Zhou Bichang) latest album i.Fish.Light.Mirror, which includes one of Warren’s compositions, titled I Miss U Missing Me [MV]… which has also been translated into Mandarin as Yi Di Lei de Ju Li (一滴淚的距离, A Tear in the Distance) [1].

I have been preparing for this interview for the past two or three weeks, though I have been listening to her songs since I’m old enough to remember. After all, Warren’s first charting hits began in ‘83 and ‘85… and I was born in ‘86. She especially marked a big chunk of my teenage years with songs like Can’t Fight the Moonlight, Please Remember, or But I Do Love You, all performed by LeAnn Rimes for the Coyote Ugly Soundtrack. Warren wrote songs for pretty much all the boy bands I grew up listening to, like 98 Degrees, Westlife, BackStreet Boys, and Nsync, these guys even performed Music of my Heart at the Academy Awards with Latin sensation Gloria Estefan.

And talking about Latin music, Warren has also written songs for Ricky Martin, Jon Secada… and her Spanish translations have been performed by the likes of Yuri, Luis Miguel and Chayanne. Please, Ms. Warren is just a global songwriter!

Let’s start with a pressing curiosity. I was at a Karaoke bar the other day, and when I Don’t Want to Miss a Thing started playing, everyone sang it out loud. What makes this song special that everyone knows it by heart and wants to sing it at the top of their lungs?
I just think it’s one of those songs, one of those melodies that anybody can sing. It kind of makes you feel good. That was in Peru, right?

Yeah.
It just goes to show you that a melody goes around the world. It’s got the right melody, the right words… it’s just a world’s song. It’s such a great example of that, it just stands on its own.

What was the thought behind I Don’t Want to Miss a Thing?
I was thinking about loving someone so much, that you even miss them in your sleep. It’s not how I would feel about anybody, but there’s people that have that kind of love. You just can’t wait to see them. It’s just a very cool idea.

We just got really interested in contacting you when we read about your recent composition for Chinese singer Bibi Zhou.
How do you know a Chinese vocalist in Peru?

I’m a Chinese descendant, so I look for a lot of entertainment information online. In fact, our job in YAM is to talk about all of entertainment from around the world. So when we learned of your collaboration, I lost it.
She’s a good singer, huh?

She is one of the best vocalists.
Yeah, I thought she was great.

How did that come about?
That was actually Julie in my office, she’s the one that sent her the song. She does a lot of the European and Asian deals, and she told me about her, so I checked her out. I thought Bibi was great when she did the song. It’s always nice when they record your songs from different countries. It’s kind of the same thing with I Don’t Want to Miss a Thing in a Karaoke bar in Peru. It’s worldwide.

Is this your first direct collaboration with an Asian artist? I mean, I know that your songs have also been translated to Japanese and other languages.
No, I’ve done other stuff with other Asian artists. I don’t normally write songs for people. I wrote it, and then turned out to be a great song for her. She made it her own, and became her song, you know what I mean?

Have you heard the Mandarin translation?
I haven’t heard that yet. Is it beautiful?

Yes, it sounds great. It was translated into A Tear in the Distance.
Oh, wow. Yeah, it’s not going to mean exactly what it means in English, which is fine. Is Bibi a big artist out there?

Yeah, she was actually the runner-up on a pop idol singing contest.
Oh, wow. Is it like American Idol?

Yeah, but it’s only for girls. It’s called Super Girl.
Super Girl, I like that.