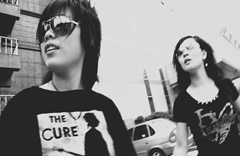 Super, Girls! is a documentary following a group of girls who are set to audition to get into Super Girl, China’s most popular pop idol-style type of show for girls. Similar to American Idol, where we see people from different backgrounds trying to get into the show to fulfill their dreams of becoming famous and changing their luck.

In it, director Jian Yi shows us girls ranging from average “girly” girls , all the way to more “boyish” girls, and going through everything in between. The thing about Super, Girls! is that we never really get to listen to them singing… or see them auditioning, not letting us form our opinion on whether any of them deserved a spot in the show or not. Except for the main girl (whose name escapes me, but she’s the one with the glasses in the picture).

When we’re introduced to her, scouting the competition and laying out her plan for auditioning, we know straight away that she’d be better suited to be someone’s manager than an idol. She goes through the motions of seeing the people she knows auditioning as she waits for her time and sees others fail.

In a surprising turn, especially for those not very aware of what’s going on in China, the girls talk about how they belong to a broken family… or not traditional families. Many of them formed by re-marriages or talking about step-mothers. There’s a certain disconnect in them regarding relatives and society that mirror many of our own developed world views.

Then many of them talk freely about sexual orientation and sexual identity, joking about how one of the contestants looked so much like a cute guy, that people wouldn’t notice if she told her friend she was her boyfriend. It is discussed that contestants tend to sport boyish* looks to favor female voting — which is the program’s main audience.

Despite people’s thinking that Super Girl lets its audience have a taste of “democracy,” there is a lot of talk about people buying their way in, as well as setups for mass voting that could possibly sway elections. Pointing out that all types of governments have issues, but which one would work best within a culture? In the end, more than 800 million people did send votes during the show’s third season.

Overall, the documentary isn’t telling us what to think of something, but it’s showing us a lot. A whole group of young women looking for something, some of them have dreams, others have no hope… but all of them struggling to make it in an ever-changing China that’s going to keep on changing. **

Stream the documentary through IndieFlix | MUBI

There’s also a hardcopy version for institutional use at Amazon.com

**Note: By the end of the documentary, it is stated that Super Girl was cancelled. However, since then the show was relaunched in 2009 under a different Chinese name, but kept its title in English. The 2009 season spawned winner Vivi Jiang Yingrong.