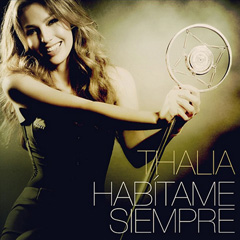 I haven’t listened to Thalía since… maybe her Mujer Latina [MV] days, and that was in the late 90s when she was about to hit 30 years old. Now, at 41 and a mother, I’m stunned at her turn for a super mellow style, though surprisingly consistent with her sound, her latest album — 11th studio album at that — Habítame Siempre is familiar ground, never bordering on boredom and favoring the comfort (and the maturity) that comes with accepting who you are… *cough* unlike some other Mexican singer who *cough* tries too hard to stay relevant.

Thalía is a serious artist, yo! Despite shooting to Latin stardom in Latin pop group Timbiriche, followed by the massive success of the Marimar or María la del Barrio telenovelas, and kinda being crowned as the Queen of Latin Pop, Thalía chose to not try to be hip and cool, staying as far away from dance music and electronic beats that has plagued the market worldwide. In Habítame Siempre, her songs don’t seem bigger than her like they seemed in En Extasis with tracks like Gracias a Dios [MV] and some of her other ballads. Thalía has grown into her musical persona and fits perfectly into the album despite not being a powerhouse vocalist.

The best example is the title song. Translated to Live in Me Always, the song talks about a person (according to promotional material [1], it could be her mother who passed away) that is no longer present, but that life delivered bringing her peace and blessings just by being around them. Musically, it’s the Latin baladista style that we’ve come to know, but with much stronger lyrics and themes. Habítame Siempre, however, follows through with a cover of old school Latin jazzy song Con Los Años Que Me Quedan [MV] by Gloria Estefan, featuring (surprisingly) members of Camila and Reik, that doesn’t quite have the same punch as with Estefan’s vocals.

Lyrically speaking, Thalía’s type of music seems to bring back the qualities of Latin ballads of yesteryear, continuing with the album’s first single Manías, Tómame o Déjame, or No Soy el Aire in which she states “I’m not the air, you’ll live on when I leave, and you’ll continue breathing just like before.” While also adding a collaboration with “Contemporary Adult” (hate the term) Canadian Michael Bublé, with yet~ another rendition of Bésame Mucho. But I’ll give Robbie Williams the award for best crossover collaboration with Muñequita Linda, a jazzy Latin pop duet all in Spanish reminiscent of Williams’ Swing When You’re Winning album.

One of the best tracks lyrically on Habítame Siempre is Bésame, written by Ricardo Montaner and Chacín, with the very sensual lyrics that say, “Kiss me on the mouth, with your laughter tear, kiss me the moon and cover the sun with your thumb, kiss me the space between my body and your silhouette,” accompanied by a simple instrumentalization. However, the album doesn’t forgo more modern or up-beat collaborations, like Te Perdiste mi Amor with Dominican-American Prince Royce, with a swift Spanglish back and forth, Dime Si Ahora, Ojalá, or Regalito de Dios — which totally takes me back of those days of heavily Latin Latin pop.

I’m rather surprised I like the album so much. Maybe I should re-explore my Latin roots once again.

Preview on Xiami.com | Like it? Buy the album on Amazon | Amazon MP3 | iTunes