As the conversation continued, it was clear they were all very hopeful about having future shows in the US, citing it as a definite goal for their future: “We already have a lot of shows in Europe, but not in the US…. But in October, we’re going to have a show in the US.”

[Luckily for all of us, YAMMag’s very own Jenna Rowe was taking pictures and suggested the Cedar Cultural Center in Minneapolis.]

They’ve already been presented with a few opportunities from a few unlikely places. When they performed at SXSW two years ago, Sean Lennon approached them. Ilwoo also reveals, “Last year we had a show in Spain, and he came.” Of course, there are those stages they dream of one day alighting. Ilwoo mentions Glastonbury and Hellfest, a heavy metal festival in France—as one would expect from the self-proclaimed metal head.

[As of the posting of this interview, Ilwoo got his wish, as they’re now part of the festival lineup!]

With a new album on the horizon, the possibilities for new collaborations and exploration of different genres is virtually endless.

And though they don’t exactly get a chance to interact with many bands when on tour, they’ve still managed to branch out and work with different artists. In fact, Ilwoo revealed,

On the second album we already collaborated with a Korean rapper. His name is Ignito. And so we worked with hip-hop. Maybe next time, I don’t know, we are going to work with something else, another genre of music. We are very open.

I call his bluff, suggesting an idol group, like EXO. “If Cy wants, we’re going to do it.” And it’s from this point, things take a turn for the absolutely hilarious. A seemingly innocuous question, what the members would want to do if they weren’t in a band, marks a turning point in our conversation. Ilwoo, ever the musician, proclaims, “I don’t really think about that.”

However, Bomi reveals a secret desire that no one had really been privy to: “I want to try acting.” When asked with whom, she became really shy, hiding behind Ilwoo and giggling a bit, before she sheepishly revealed, “Song Joong-ki.” Our entire party exploded with excitement.

It’s here we begin to see the playfulness in their nature. When I ask if they ever get nervous playing the bigger stadiums, Ilwoo says, “Before the show I just drink a beer!” So, of course, we get into a conversation about the best beers. Ilwoo’s voice peaks with interest at the mention of a dark Russian beer called Old Rasputin, and even claims to love just about all beer.

However, when the subject of Korean beer comes up, all three members are emphatic: “No!” “It’s so sorry,” Bomi proclaims.

“I recommend if you come to Korea just drink Budweiser or Miller. Foreign beer,” Ilwoo says. 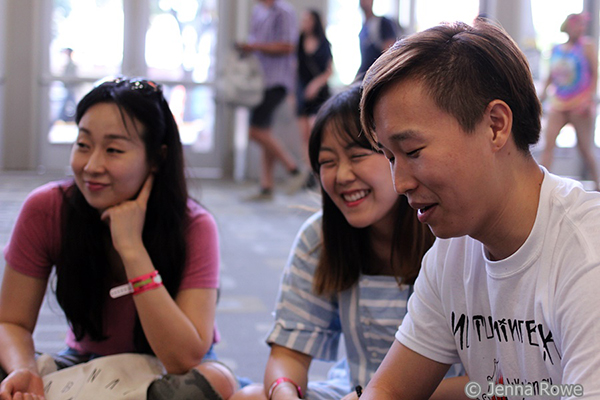 We all have a laugh [Bomi even making this interviewer blush when she calls me “cute”], the conversation taking a hard left turn. But even through all the laughter, each member is incredibly humble. At the question of any advice they may have for an younger artists trying to come up in Korea, Ilwoo says, “I don’t know because I don’t feel like I’m worthy to give advice to the next generation because we haven’t achieved what we want to achieve yet.”

Even as they give their final thoughts, they were nothing but gracious: “First off want to say thank you for inviting us again to SXSW. And really thank Mandoo Entertainment because they’re really a big support. If they don’t exist it’s impossible to be here. So really want to say thank you to Mandoo Entertainment.” He left off with a common theme in our interview, “We really wish to have more shows in the US.”

One or two interruptions from a wildly swinging door notwithstanding, the musicians of Jambinai were both gracious and incredibly sweet, open and honest. This is a band that is slowly starting to change the landscape of music in South Korea, introducing younger fans to the unparalleled beauty of their traditional roots. I honestly believe I was in the presence of superheroes. They formed with one goal: bring music to the masses, and they truly are injecting life and vitality into what is lamentably a dying art in South Korea. Well, I can say without a doubt Jambinai has come to save the day!

You can find out more about Jambinai on Facebook, and follow them on tour if you find yourself in Europe this summer (or follow their Instagram for updates). Please purchase their album Différance on iTunes, and watch out for their second full-length album Hermitage, a Bella Donna collaboration, due for release 17 June.