lxsyd – All the Alcohol is not as Good as You 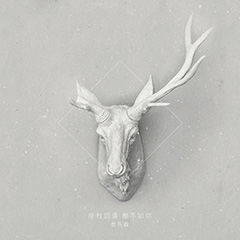 *Note: None of the songs have official English names, all my translations. Neither does the album. If you have better translations, leave in the comment!

I just discovered this Beijing-based band — big props to the Xiami front page, yo! — it’s actually called Lu Xian Sen Yue Dui (鹿先森乐队), which stands for The Deer Band, but as with all Chinese internet practical purposes, we’ll call “lxsyd” [taken from the tfvsjs book]. If Google Translate is correct, lxsyd launched their debut studio album via a crowdfunding project started early in the year, looking for a 100,000 Yuan goal (around $14.5k USD at current exchange), but managed a bit over 300,000 Yuan from 6938 backers. The album was ready for its release in early November.

The album, Suo You de Jiu Dou Bu Ru Ni (所有的酒，都不如你), which stands for “all the alcohol [that I have] isn’t as good as you,” starts off with a mellow guitar tune of Insomnia, perfect to start your midnight listen with a chorus that goes “Everything that’s kept in my mind constantly is the main reason my lyrics flow right off//joyous love, deadly, endlessly//Every passing night, the sober people still remember//Song of insomnia moments inside the mind,” ending in an orchestrated crescendo.

The album continues with the previously released song, Spring Breeze, a melancholic song about a love that’s no longer here, which contains the phrase that gives the album its name “I am in the 2nd Ring Road thinking about you//You are far away in the mountains, the spring breeze//Today the wind blows you, it rained//I said all the alcohol is not as good as you.” It could be a typical Chinese love song, though, the band infuses it with that characteristic Beijing indie rock vibe, which Wang Feng uses so effectively to floor everyone so often [1][2][3]. However, the best moment comes with the next track, Hope You Have Someone to Talk to in Long Dark Nights, because the rhythm is so soothing  with a guitar, accompanied by a piano and strings at the beginning like prepping you for that midnight pep talk on the phone, and explodes with guitars, drums and a faster pace after going through the hook and chorus once.

This is the song I sing for you,
Singing in the middle of the night that appears to be warm and beautiful,
Resembling a bird flying over the open fields of grass
In a style that rocks, in a loneliness that rocks

Reviewing music that’s not in a language you fully understand is always a challenge, but I follow enough Chinese music to understand basic themes of love and longing, which are very prevalent in music in general. With Chinese is just a matter of how much you can get without translating to measure the level of complexity. Though pop music (especially Kpop, for commercial purposes, I suppose) is plagued with English words here and there, lsxyd are measured with it by only using it in their sole English-titled Time, which talks about its certainty (that it passes by and never stops) and its fragility.

Suo You de Jiu then shifts gears with the next three tracks— with Weather Diary, We Hugged and Kissed the People who Fell in Love, and the previously released You Like the Oceans but not the Mountains; which are all a lot more upbeat in theme and mood, as if they had already reunited with a lover, especially considering the follow-up with A Long Time Ago, which features lyrics in Japanese telling the story of two people that had met in a place where they lived happily ever after, the lullaby-like song is then followed by the instrumental of Goodnight to close the album, as finishing off a story.

You can stream the album officially on Xiami, and though you can download the first track, Insomnia, for the rest of the album you’ll have to download the Xiami app on your phone, and scan the QR code provided on the page.

You can follow lxsyd’s activities on their Weibo, Douban and Xiami.

Special shout out to magicube!