I can honestly say I’ve never been more impressed or fascinated by a band than I was when I first listened to Jambinai. Comprised of guitarist, flutist, and main composer Lee Ilwoo; haegum [1] player and vocalist Kim Bomi; and geomungo [1] player and vocalist Sim Eunyong; the band takes the beauty and breadth of traditional Korean music and bombards it with the dissonant gut-check of heavy metal.

To say I was blown away when I first listened to them would be an understatement.

Their musical reach is truly global, having recently been invited to perform in Australia and twice across Europe. The band also garnered the 2015 Committee’s Choice Award at the Korean Music Awards. What’s most telling, however, is how they’ve managed to touch lives and turn heads with their brand of avant-garde rock.

It was fitting, then, that meeting them for an interview was the very first thing I did when I reached the festival. After searching for about five minutes for an actual place to have our conversation—the convention center overflowing with people and bustling with activity—we decided to take a seat on the floor off in a little corner by the room for the Trade Show.

As is customary with first meetings, we introduced ourselves; they, of course, getting a kick out of finding out my name is Cy (yeah, I got a few laughs and a horse dance out of that one). Their individual introductions were decidedly quiet, belying the fire and thunder of their music: “We are Jambinai. My name is Il-woo, and I play the Korean traditional flute (piri) and guitar.”

“My name is Bomi. I play the Korean traditional fiddle (haegum).”

“And we are Jambinai, and we play with Korean traditional instruments mixed with modern music,” Ilwoo declared proudly.

As this was their second time being invited to SXSW, feelings were unsurprisingly jubilant. “For me,” Ilwoo began, “it’s really exciting. Actually we are going to have [a lot of] show[s] in Europe, but not in America. This is our second chance to have a show in the USA, so [we’re] really, really looking forward to having a show, and really excited, and really feel thankful.”

It’s regrettable, really, the lack of knowledge of Korea’s musical foundation, Ilwoo laments. “Nowadays in Korea they don’t listen to traditional music and they don’t respect [it]. We really want to communicate with ordinary people, so we decided to make a team and make music that is possible to communicate with ordinary people.” Thus the inspiration for the band itself. 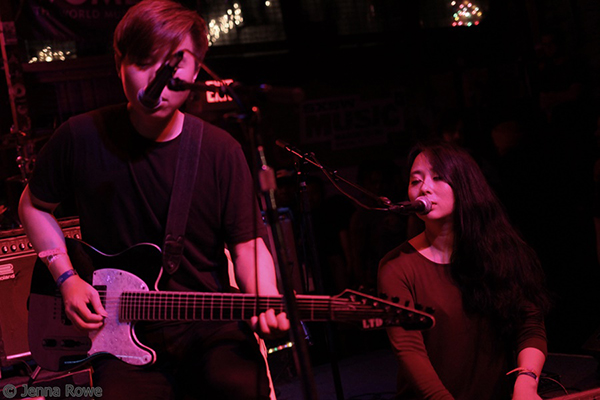 With as pure and ambitious a mission as theirs, it’s no surprise the band has gotten national and international recognition. It’s also no surprise that after only a few years, they’re beginning to see a swell of interest from younger people:

We had a show [one week prior to SXSW] in Korea. The audience is all really young people, and they are just ordinary people who don’t play or listen to traditional music So we feel really impressed and really happy.

It is, however, harder to convince those with experience as traditional musicians of the brilliance of blending such disparate genres: “When we started Jambinai,” Bomi begins, “at the time they think it’s just noise! But nowadays they’re perception is changing every day. It’s good!”