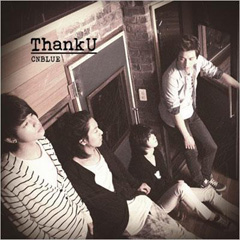 From the get-go you can tell this album will be fun.  The intro and then the first song make you want to get up and dance.  Up to Now or Never, the songs sound like they could be an intro to a Disney Channel show or perhaps an insert in an anime.

Up to that point, I perceived it as a feel good album; not outstanding but not failed.  Then we get to the first Japanese song on the album, Voice. Suddenly, it’s like you’re listening to two completely different albums.  I’d even say from there on it has a lot more personality. It feels more like C.N. BLUE rather than yet another perky Jpop group.

My favorite songs on this album and the ones I recommend the most: Just Please and a.ri.ga.tou.  They are wonderful in every aspect. The vocals, instrumentation and originality.  Just Please has the right amount of mystery to hook you with its eerie music and paused rapping. a.ri.ga.tou is simply a beautiful and delicate rock ballad.  But by far, the best part of the album is really the vocals; they are sweet nectar to the ears.  The timbre in Yong Hwa and Jong Hyun’s voices grip you with its velvety, clear quality.  It’s so enjoyable just to hear them sing that you can overlook the fact that the first half of the album is quite cheesy.