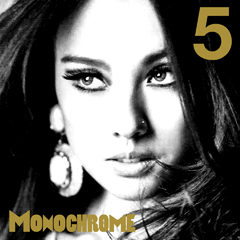 The Queen of Kpop is back after a chunky 2010 comeback [1], but Monochrome brings her back in better shape than ever as she puts together a team of creatives that includes Norwegian composing team Dsign Music and even Taiwan’s singer-songwriter Joanna Wang, who — I’m sure — collaborated with Jaakko Salovaara and Matti Mikkola on that Finnish creative songwriting camp she attended. But don’t take my word for it.

At first view with singles Miss Korea and Bad Girls, you might think these are complete opposite styles of music and themes. However, these work as opposite sides of the same coin, working together instead of working against each other. Monochrome seems to be an amalgam of genres, from the familiar electro dance pop that would be Bad Girls, to rock & roll, Korean latin-esque love ballads to honky-tonk blues and country blues.

The Queen of Kpop is honky-tonk, yo! At the hand of Kim Tae-chun, who takes Hyori completely out of her musical comfort zone and pushes Monochrome into trailblazer pop territory; the album is infused with so many musical genres, but it never truly stops being pop, which is a feature, unlike Christina Aguilera’s Back to Basics or any of the Jay Chou albums that might have included honky-tonk [1][2].

The shocking thing is that starting out, Lee gives us Holly Jolly Bus with a bluesy introduction that then gives us its pop verses intertwined with those familiar harmonica interludes and some barking from Soonshim (that’s her dog, alright), and while Miss Korea gives us the impression that the whole album might follow a more blues-infused road, she gives us Love Radar which is a great electronic pop song with a great interlude by Beenzino.

The structure in the album gives us her most Hyori track in Bad Girls followed by a bluesy pop ballad (I Hate Myself), some country (Bounced Checks of Love), rock & roll (Full Moon), taking us back into bluesy pop (Trust Me and Special) and hitting us hard with Amor Mio, which surprise with its ability to take the most from Hyori’s vocals in contrast to Bak Ji-yong’s deep vocals. I would have probably dared to cut the album there, if it hadn’t been for that other Kim Tae-chun track titled Wouldn’t Ask You.

While I do think that Monochrome runs a little bit long — I would probably cut I Hate Myself  and Show Show Show off the tracklist, shifting Oars up to make Better Together the album closing track — it’s got great production work, taking Hyori on a road where very few Princesses and Queens of Pop [1] have dared to venture. Even when Madonna tried making country work, she only did it by image [1][2]. It’s quite a daring attempt by Hyori and her creative team, making the wait for Monochrome all the more satisfying.

You can preview the album on Xiami | Like it? You can get the album on iTunes, and YesAsia as the Normal Edition and the Special Limited Edition with the 156-page Photobook.