Because the essence of most traditional music is that of calm, introspective reflection; to offer a powerful alternative to the quiet is a simple yet innovative concept. What goes through an artist’s mind when bringing thunder to a summer breeze? “For me,” says Ilwoo,

The sound is very reminiscent of the type of aggression and fire I heard in bands from my own childhood, groups that defined the “alternative” genre in the ’90s: Nine Inch Nails, Soundgarden, and the like. Ilwoo nodded enthusiastically: “For me, Nine Inch Nails! I was really a heavy metal kid, and also nowadays I listen to heavy metal or punk rock or really hard music. So the heavy music or just some kind of modern music, pop music or hip-hop or electronica, they inspired me.”

Ilwoo took on the role as band spokesperson quite naturally, being forthcoming and very willing to chat about their music and his inspirations. However, Bomi was equally enthusiastic, even if not necessarily as talkative. She had her own thoughts about her experiences learning about genres that would have otherwise been unknown to her:

In my case, I didn’t know the harder style music when I started with Jambiani. But Ilwoo was really instrumental in exposing me to that type of music. I’m an example of music being translated to people who might not necessarily have knowledge of other music. This is definitely easier to get across without that barrier. 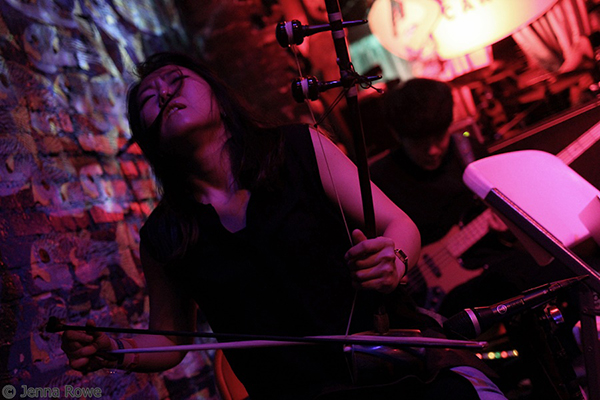 Music with that emotion no doubt comes from a very personal place. That much aggression is always steeped in something from the gut, a feeling that drives your music and makes it strong. Ilwoo says,

For me some music is very personal. Some tracks are about my very bad experience, but some tracks are the universal experience of being together because we had to really talk about the feeling and share the feeling. So mostly I write the songs, so when I write, I think about their feelings and their story.

“We don’t have lyrics,” Bomi stated. “So his own story [is in the] songs. For me I feel another feeling.”

As students of music, it’s no surprise they pull inspiration from other musicians and genres, including a bit of jazz. “And other countries’ traditional music,” Eunyong added. As they embark on their third European tour (which kicked off on 5 May at Barcelona’s Sala Apolo), one can only imagine the magic they can infuse in their already explosive sound. “[We’re] looking forward to the European tour. Because in June we’re going to release our second full-length album and have a tour for the new album. So we are going play new tracks and maybe also with different types of style, different to last year. The European people they really know our music more than before!”