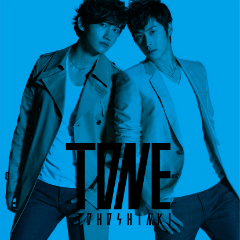 I am still pretty much on the fence about this album. It contains some great tracks, no, let me rephrase that — all of the tracks are pretty good. I think that the only thing that is bringing this album down is the amount of voices. Now that Tohoshinki are only a duo, they can’t really do the songs they are used to. Changmin is the only good singer, but his voice has some limitations because he is a tenor. Yunho, although he has a decent voice, can’t really carry a song by himself (unless he sings really low or does that really annoying high octave rap/sing). I think because he had four great vocalists in his former group, he lacks a whole lot of confidence when it comes to his voice.

I can’t, for the life of me, understand why I am not that crazy about this album. As I said earlier, every track is good. I love their previous Korean album, so what is holding me back? No idea. I think that it might be the fact that this is not the Tohoshinki I used to love. Somehow this is still good, but not as amazing as Tohoshinki used to be. Mostly because they have been concentrating on the Japanese market. There’s no denying that Kpop and Jpop are worlds apart. Kpop is a little more fierce, a little more raw. Jpop tends to be a little bit more cute and happy-go-lucky. Before, Tohoshinki always took Jpop and did something unique with it. They didn’t sound like other Jpop acts. I guess with Tone they are trying something new. It’s not bad, but for some reason my brain refuses to like it. Well, screw my brain.

I will say this, Tohoshinki are shooting themselves by re-doing Somebody To Love. I feel that there was no need to do that. One shouldn’t mess with the past when the wounds are still pretty much open (seeing as the DBSK lawsuit isn’t settled). It’s not fair for Tohoshinki to not be able to sing their old songs because of sensitive fangirls, but re-doing that single wasn’t the best decision. But I forgive them because they have Shiawase Iro no Hana, a ballad that somehow makes me love Tohoshinki with ardor.