This is my 200th post here on YAM. For weeks I have been  thinking about what I wanted it to be about. For me, it needed to be special because, after all, it’s my 200th post. It has taken me a whole lot to come to this number. Heck, I didn’t think it would be that hard to write 200 posts. I feel like I’ve written so many more.

Many ideas came to mind, but what I was certain about was that it needed to be very special. I believe this is the next step in my development as a writer. So who or what was to get the honor of being my special 200th post? As much as I kept thinking about it, it came back to one thing and one thing only: DBSK. 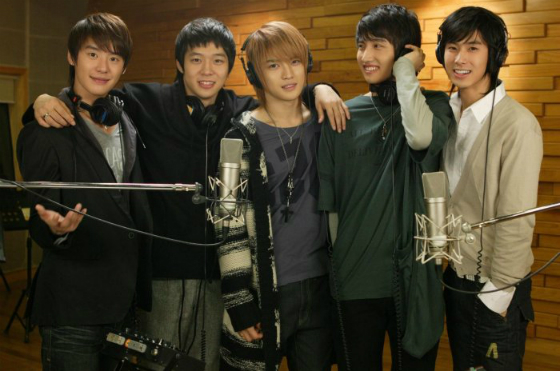 The good old days of DBSK

They are, after all, the ones that inspired me to achieve more of the goals that I felt I was too weak for. They are my source of inspiration for anything that I need to achieve. I think I can go as far as to say they are men that I look up to, my new role models.

Once I decided on DBSK, the question was what to write concerning them — should I do an introduction, perhaps a list of their best MV’s, best albums, best Korean or Japanese songs? Should I talk about the lawsuit, the future of DBSK or perhaps… the list was pretty damn long. But then I decided to do a comparison of their albums because, well, because it’s interesting, challenging and a bit frightening. This draft has been in my computer since October, part out of fear, part because of me not getting my mind around the issue. I feel that I need to challenge myself more with my writing. So here goes.

I will do a short review of both albums and then compare them to form a conclusion. Why not? JYJ and Tohoshinki are former members of the extremely popular DBSK/TVXQ. Although two of the members keep working under the name TVXQ, it is not the same thing. Adding to it is the fact that both groups came out with albums just one day apart. Coincidence or conspiracy? It was too juicy for me not to do this.

The interesting part here is that JYJ and Tohoshinki are different in many ways. JYJ released a Korean album, Tohoshinki is the Japanese name TVXQ takes when promoting in Japan. So this is Kpop versus Jpop. Also vocal talent  — there’s no denying that JYJ consists of three-fifths of the best voices of former DBSK, but current TVXQ still houses Changmin. How will that affect the overall product? Also this is a battle between small production and big production. JYJ, for the most part, write and produce their own songs. TVXQ is backed by SM, which is one of the biggest music companies in Korea. Not that it has to mean anything, but TVXQ has a huge room full of producers with songs ready to sing.

There are many elements to compare to each other. So let’s see how this goes, oki?