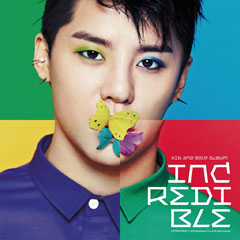 After a very successful debut, JYJ’s Kim Junsu had much to live up to. With speculation surrounding the next group release and a lot of fervor around the continued troubles with former record company SM Entertainment, Xia’s sophomore effort could have easily gotten lost in all the madness.

Incredible. It’s most certainly a lofty title, one that immediately raises expectations. Releasing 11am as the first single was risky. The song is so heavy-laden with emotion it could’ve very easily set the rest of the album up for failure. Indeed, when the title song was released, I became a bit wary. Incredible is typical pop, nothing impressive vocally or musically. The video is all flash and seemingly little substance. So I was really nervous to explore what the entire album had to offer.

As it turns out, I had nothing to be concerned about. If Tarantellegra was Xia’s reawakening, Incredible is his moment of revelation. The album opens, unexpectedly, with sexy R&B tune No Reason, surprising because many pop artists tend to open their albums with the title track and/or first single. To open with a song that’s so sensually evocative was bold. However, the syrupy satin of the song did what it was supposed to — invited listeners to stay and unpack more of the musically dexterous Xia Junsu.

No Reason reveals his sexuality, and tracks like Apology and Don’t Go reveal his remarkable sensitivity. Unsurprisingly the ballads on Incredible are unlike anything many tend to release in pop music. With his newfound adoration and competence as a musical actor, Junsu has discovered new depth and expressiveness in his vocal performances. 11am is an absolute marvel. It’s a brave track, being at once emotionally raw and technically brilliant. It was also incredibly smart to place the ballad at the very end of the album. It’s the type of song that resonates long after the last note is sung.

That being said, Incredible’s title song is rather lackluster. The inclusion of P Diddy’s son Quincy Combs on the song is… unfortunate, especially considering Quincy’s skills as an MC are… limited at best. But, let’s be real, Junsu is one of the dancingest fools in Kpop, and the dance tracks this time around are more impressive. They, in fact, have a layer of maturity missing in those from his debut. Turn It Up is just sexy, dripping with the type of pure chocolate lust that could get you thrown out of a club. The following track Fantasy is playfully coy, managing to balance the overt sexuality in the previous song.

The track that’s caused the most conversation is the mostly spoken This Song Is Funny, Right? It’s clever, rough, and if you pay attention, the most open Xia gets lyrically, taking moments of aggravation from the past year. It’s slightly abrasive but certainly honest. In the end, inclusion of Boom and the sheer ridiculousness of the events he’s talking about make the track playful and entertaining.

Though I’m not quite sure if it’s earned its title, Incredible is a smart and bold sophomore album. As the album cover suggests, Xia Junsu is showing us all the layers of himself: sexy, playful, flirtatious, emotionally vulnerable… honest. While some tracks proved less impressive than others, overall the album is a great piece of work from the talented artist.

Standout Tracks: No Reason, Confession, Don’t Leave, Turn It Up, Funny Song, 11am

You can listen to Incredible on Xiami. You can buy it on iTunes, YesAsia, Synnara, and DVD Heaven.