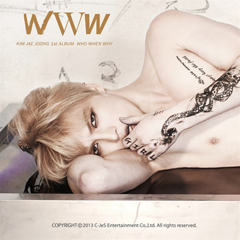 When Kim Jaejoong took his first steps into the rock genre with this year’s release of I, many were (unsurprisingly) skeptical. After all, pretty boys come and go, and so many of them want to be “taken seriously,” attempting to go outside their comfort zones, to varying levels of success. However, when his first single dropped, all talk of him being nothing more than a rocker wannabe was veritably squashed.

I wasn’t sure what to expect with Jaejoong’s first full-length solo album. Given his style of writing and composing, I honestly thought I’d get at best a smattering of rock, but mostly I envisioned the emotional singer going for more “emo” fare. However, one thing Kim Jaejoong always manages to do is deliver the unexpected. WWW opens with a fast-paced tune very reminiscent of early 2000s Japanese rock. Light is just as the title suggests — energetic, exciting rock, complete with dramatic guitars and pounding drums. We also get a taste of Jaejoong’s seemingly endless range, the singer giving us a crescendo wail at the song’s bridge.

WWW is a testament to not only Kim Jaejoong’s evocative songwriting (having penned ten of the thirteen tracks himself), it’s also a window into the fearless guile that has driven his career to this point. He explores the genre to its fullest, illustrating the various facets of his personality with his vocal flexibility and navigation through the differing aspects of rock music. He includes more pop-focused tracks (Don’t Walk Away), traditional rock (Butterfly, Rotten Love). He tackles Brit rock with surprising accuracy (Let the Rhythm Flow), gives us a bit of his competency as a singer with the acoustic track Now is Good, and gets grittier with tracks like 9+1#, exposing some superior rock soul.

People have gotten used to Jaejoong’s vulnerability, especially in terms of lyrical content. But he’s shown he’s capable of molding his voice around whatever personality each song takes on, going as far as using various vocal inflections to add shade and multidimensional scope to his style (Luvholic). There are moments on WWW in which he goes through the entirety of his range to express the depth of the lyrics, none more so than when he’s singing his own. Tracks like Paradise and Just Another Girl, the album’s second single, highlight Jaejoong’s talent for constructing complete songs. Just Another Girl uses post-grunge as its vehicle while Paradise is a yearning ballad that’s equal parts emotion and sensual tension. Not only are both tracks lyrically unapologetic, they’re both vocally exceptional. The clever use of vocal layering gives definition and form to the landscape of each story. The explosiveness of his higher register adds emotional depth and veritas to the pain of betrayal and hollow emptiness.

WWW is the model of how to successfully navigate a genre that’s unfamiliar to you. Kim Jaejoong audaciously challenged the industry. He pushed past the stereotype of what an “idol” is allowed to do and proved he’s up to the task of delivering genuine rock music with as much soul and passion as veterans of the genre. With these thirteen tracks he’s cemented his status as a hero of Korean music.

You can listen to WWW on Xiami. You can buy the album at iTunes, YesAsia, DVD Heaven, Synarra, and Kpop Town.