TVXQ! – Five In The Black 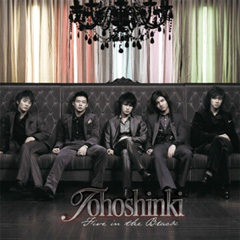 After a pretty mediocre third album in Korea, the boys of DBSK returned to Japan under their Jpop moniker TVXQ (or Tohoshinki). With their sophomore effort, Five In The Black, the quintet was hoping to shed some of the baby fat and give audiences a more mature and sophisticated side of themselves.

Expectations, as you can imagine, were pretty high, considering the success of their prior albums and the audience they’d managed to amass with their debut Japanese album. Five In The Black needed to be something the buying Jpop public had never heard before, and for the most part the boys delivered. The production team on the album seemed to be comprised of people who had a very keen knowledge of their American pop music history, songs ranging from high-energy pop (Zion, Step by Step), classic Jpop (Sky, High Time), and sophisticated balladry (Begin, Proud).

Though the obvious selling point of the quintet is the vocals, much has to be said about the production of Five In The Black. It’s some of the group’s most expressive and mature. The Rhythm Zone team showed themselves for the brilliant production team they are. With work that’s very reminiscent of classic 90s R&B from the legendary team Jimmy Jam & Terry Lewis (geniuses behind Prince’s sound in the 80s and Janet Jackson’s most successful albums) with track Choosey Lover, and an uncanny understanding of the Jpop scene and the music people were listening to, enlisting songwriting team H.U.B. for tracks Sky, Dead End, Promise, Miss You, Step by Step, and Hello Again.

Of course, TVXQ would be nothing without the ability for the group to blend with the flawless precision that had set them apart from every other group in the market. Some incredible songwriting by Mai Osanai and composition by Jin Nakamura pushed Five In The Black from simple bubblegum to a surprisingly sophisticated piece of pop music. This songwriting/composing duo offered a sound we hadn’t quite heard from the boys up to this point. Songs Proud and Begin highlight the powerful vocal of the group but also give listeners a glimpse into the intricacy of their harmonization. The composition of the ballads allowed fans and newcomers alike a peek into how intrinsic their sound is to the core of their success…

And they proved that with flying colors.

But what’s more impressive about Five In The Black is just how complete the album sounds. There are songs on here for every type of music fan; however, the album isn’t incoherent. Each song has a place and a purpose. The album starts with Zion, a smoother dance track that entices but then hits a high note of energy that carries through to the following track. It’s the perfect track to set the high-energy pace of the album. The ballads provide an incredible compliment to the faster-paced songs, seamlessly melting into the next track and giving depth and balance to the more pop-heavy tracks.

With the surprising combination of exciting pop and mature balladry, catchy production and smart composition, Five In The Black stands as the group’s most solid, most well-conceived album to date, and a testament to the power of high-quality pop and good, old-fashioned talent.

You can listen to Five In The Black on Xiami. You can buy it at YesAsia, DVDHeaven,iTunes, and Synarra.