I love films that become love letters to the cities they shoot in; it’s one of the reasons I still love the Cities of Love anthology films, and it’s one of the reasons I rushed to check out Emily Ting’s first fictional feature length, It’s Already Tomorrow in Hong Kong, which has sometimes been described as the Hong Kong version of Before Sunset. However, what really got me was when people began saying that the Hong Kong Tourism Board should be paying Emily and the production for making a film to make everyone fall in love with the city.

So after watching it, I got to ask Emily about the making of the film and what makes an expat not an immigrant.

You shot on a Canon C500, and got your camera gear package for free due to the Film Independent Canon Filmmaker Award, so how much was the actual budget to produce the film? What was the costliest aspect of production besides, I suppose, going to Hong Kong?

I am not at liberty to disclose the budget of the film, but I will say that it’s under $1M.

There are a lot of costs involved in producing a feature film, including hiring the cast and crew, renting equipment (besides just the camera package), locations, food, etc. Because we wanted to showcase Hong Kong in all its glory, locations was one area we did not want to cut cost on. We rented our own ferry, which was not cheap, but the single most expensive location was the Temple Street Market.

Does that include that story about having to deal with the triads?

Yes, we had to pay off the triad via a “fixer” in order to shoot there! But we also shot on so many public streets that are free, that it all kind of balanced out in the end.

Did you run into any specific issues shooting in public spaces? Which one was the trickiest shot to film?

We had permits to shoot all over Hong Kong, but we didn’t have the budget to close off any streets, so we were constantly dealing with the real crowds of Hong Kong. We did run into some issues dealing with drunken expats on weekends, as they would oftentimes ruin a perfectly good five minute walk and talk sequence by yelling at the actors or say hi to their moms on camera.

When we were shooting in Soho, I had to promise to buy a lot of people shots, in order for them to stay quiet, but we were also able to get away with shooting among the crowds a lot of the times. For the Nathan Road scene, we put a Lavalier mikes [1] on the actors and shot them from across the street on a long lens. No one knew they were doing a scene. For the Lan Kwai Fong scene, we also used a similar technique and shot the actors walking among the huge Saturday night crowd from afar. We got the shot in one take and were able to get all those great free extras! 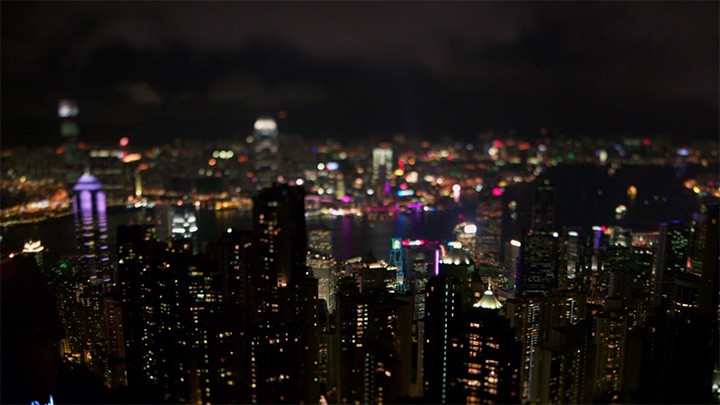 I also loved the tilt-shift shots of Hong Kong.

The tilt-shift shot was done on a second unit day, the day after we wrapped principal photography. It wasn’t a planned shot and we sort of just decided to go up to the peak. It was such a beautiful shot that we decided to open the film with it!