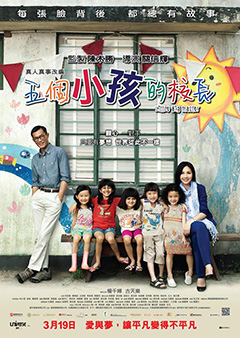 There are projects that really do go beyond criticizing, and Adrian Kwan’s Little Big Master is one so grounded in the good-heartedness of its original story that should make for a misty-eyed film of puppies and rainbows.

The film’s title, which originally translates to “the headmaster’s five children,” tells the story of a real life private school teacher, who left her good-earning job when she got hold of the news about a tiny kindergarten of a poor district that was about to get shut down, forsaking the destiny of its five remaining students, who couldn’t afford the transfer to other schools.

Hong Kong-staple actress Miriam Yeung takes on the role of the selfless teacher, Lui Wai-hung, with ease as she fights an uphill battle against the commercialization of education. She’s gentle yet spirited, which is the perfect combination as she takes each one of her students — the earnest daughter of a scrap-metal collector, Ho Siu-suet (Ho); the tormented by her parents’ fighting, Ka-ka (Fu); the scaredy yet vivacious Chu-chu (Wang), and the gentle sisters Kitty and Jennie (Zaha and Khan), who are all amazingly talented, and just so cute!

The swelling sentimental music does get to be overwhelming at times, but that doesn’t mean that the pity-party is not warranted nor heartfelt. Little Big Master manages to hit a particularly strong point when little Chu-chu, scared of thunder, has to confront her fear of being eaten away by the storm because both her parents died in one… while Auntie Han (Ng), who has been taking care of her, has to deal with the idea that maybe Chu-chu needed -maybe- a hug or two from time to time, which is a problem seen in older generation Chinese.

The adults in the story also bring much needed optimism when their children, as a school assignment, ask them what their dreams are in an attempt of Ms. Lui to connect with them. It’s tough to think about someone who would leave the comforts of life to multitask at a school for a salary that’s fifth of what she used to earn to help these children, against all odds and the ill-wishers who wanted the place to be finished. But it’s also great to see this tale on screen, despite the hurdles of a budget that ballooned from a low-budget film to a whopping $30M HKD (around $3.8 USD) [1], to maybe (hopefully) inspire to teach and give.

Also, big kudos and good boy stars to Louis Koo, who definitely takes a step back to play an incredibly understanding and caring husband.