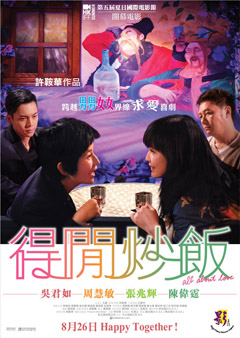 All About Love marks, I believe, Hong Kong’s first mainstream film dealing with a relationship between two women. It stars VERY funny lady Sandra Ng and singer/actress Vivian Chow — back from her retirement from the Chinese entertainment industry.

She hangs out with Eleanor, who happens to be Macy’s ex, and her partner Mai… who’s often jealous of Macy. Nevertheless, both Eleanor and Mai want to see Macy find someone and finally settle down, which seems to be a problem for Macy’s free lifestyle.

Until Anita (Chow) shows up at a pre-natal class, where both of them are attending because they’re pregnant!

In terms of presenting sexuality, All About Love is really REALLY surprising. Here you have a sexually fluid woman, who must face — besides being called a “freak” by society’s heterosexual standards — her lesbian group that call her a “freak” for their homosexual standards.

Sandra Ng plays Macy as strong, up-front, no BS in front of people, but also has a certain fear. Macy needs to deal with her commitment issues, especially with Anita already in her life. The film has a nice balance of drama and (Hong Kong) comedy. Like I said, Sandra Ng is a really REALLY funny lady, which plays perfect when Macy needs to avoid a subject.

The jumping around the timeline was a bit confusing at times, as well as those weird motion graphics/animation segments, which added a certain feeling to the film, but I believe didn’t do much to get the film going. The ending is all a little nicely tied, but it brings the question of how that family is going to deal with “family names.” I mean, how many “aunties” and “uncles” can you actually have without confusion?

And can someone explain to me the Chinese title of “Get Free Fried Rice”?