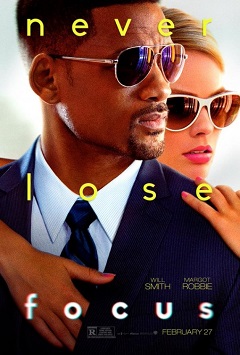 I’ll confess that I was the only one among the team that really wanted to see Focus. [1] I’m pretty sure that hardly anyone in the team gives a shit about Will Smith — and his recent film record doesn’t do him much favors, but he is still a draw with the masses for some reason. However, I really wanted to see what Glenn Ficarra and John Requa could do with someone like him. The trailer looked really interesting, so I caved in to see it on the big screen not much ago.

Focus deals with the world of con artists, but in full more detail than seeing Jim Carrey doing that in I Love You Phillip Morris. The film deals with the lives of Nicky Spurgeon (Smith), a truly professional con artist that has been many years in the game, and Jess (Robbie), a newbie hustler who wants to improve. Nicky and Jess cross paths, which leads them into a romantic relationship and Nicky leading Jess into the business of swindling and pick-pocketing, with special attention on the art of misdirection and the power of suggestion.

As Jess grows into a much better talent, Nicky decides to split aside from her. They cross paths once again 3 years later when Nicky is about to pull off a big business move and Jess’s presence might be the one thing that may throw him out of his game.

Ficarra and Requa’s latest film packs a bunch of twists to the story and has similar elements to their previous films. Aside from the con artist theme, which is catchy on the eyes and smoothly displayed, Focus shares the visual glossyness and production values of Crazy, Stupid, Love. while also using the romance angle with Nicky and Jess. My favorite scenes were the ones that packed pretty strong tension and trouble against Nicky, especially at the Superbowl with millionaire gambler Liyuan (Wong)… or when millionaire racing driver Garriga (Santoro) confronts Nicky after he figures out how Nicky screwed him over.

Focus looks more style over substance, which fits the film’s theme. However, it’s not that funny to watch since the first half involving Jess’ training feels very slow-paced often and it overexplains the con artist movement a la Now You See Me (minus the copout ending that film had) and lacks the outrageousness of Phillip Morris as well as Smith and Robbie not having that absurdly excellent romantic chemistry that Ryan Gosling and Emma Stone displayed in CSL. On the other hand, Focus amps up the pacing, interest and entertainment value when the second half of the film moves to Argentina and Santoro’s Garriga gets involved with both Nicky and Jess as well as Garriga’s henchman Owens (McRaney) looms over Nicky since he suspects something against him.

As far as Will Smith is concerned, Focus doesn’t make a strong comeback film for him, but it’s still a much more interesting role for him to chew on than the ones he’s been in for the last 7-8 years — he’s quieter and restrained, but still charismatic and funny at times. However, Margot Robbie surprises the most and shines stronger than anyone else. In stark contrast to About Time and The Wolf of Wall Street hyping her as the most desirable woman in the planet, she definitely proves that she can be more than just a sexy body. Robbie is not only pretty funny and charming to watch, she even steals the spotlight from Will and feels more truly aware of her character and the con artist scene than him.

Despite the film having some strong crazy moments — Nicky’s final crazy act gives Phillip Morris‘ final crazy act a run for its money — and a great performance from Margot Robbie, I wished Focus could have been polished much better in its screenplay and comedy value since it had the potential to be so much better than what was stylishly displayed on screen.