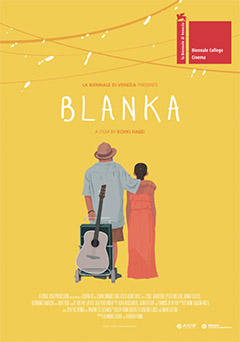 What are the chances that I’ll end up watching two stories about homeless girls who try to make up for the absence of their parents [1] in less than one month? I was invited by Cinencuentro to cover some of the films, and this Italo-Japan-Filipino co-production was one of my picks.

For many years now, I have been travelling around the world, especially to places where poverty is the greatest plague. The kids I met on my journeys gave me more strengths, inspiration and hope than anything else.

Writer director Kohki Hasei had a documentary, music and fashion video background before he set out to Manila to work on his short film GODOG. In his first feature length, Blanka, he follows a little girl (Gabutero) who begs for money and steals from tourists to survive in Manila, until the day she gets the absurd idea of “buying” a mother, so she could fix her life. Blanka meets a 55-year-old blind street musician named Peter (Millari) with whom she travels to the city.

Blanka manages, maybe like National Award-winning Tamil film Kaaka Muttai, to escape the label by exploring its more playful elements– in Kaaka Muttai, two boys trying to save up money for some pizza; and in here, having a girl saving up money to get herself a mother and finding the unlikely companionship of a good-hearted old man. In both cases, as well, our protagonists are faced with forced situations to move the plot forward, as Blanka and Peter can’t stay working at a bar as a music duo forever, and our little heroine must still experience some of the dangers of the world to finally return “back home.”

Gabutero and Millari share a sweet rapport that comes off as natural, which anchors the film in the sweeter side of drama– despite his inability to see, Peter is always there to take care of Blanka, who oftentimes behaves like a naughty kid, since she’s been fending for herself.