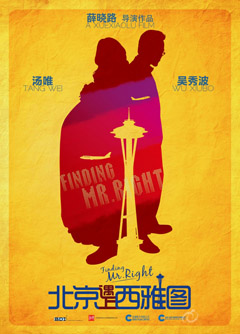 Inspired by Nora Ephron’s 90s romantic hit, Sleepless in Seattle, Finding Mr. Right finds Tang Wei playing Wen JiaJia, a… gold digger with a heart of gold, to say the least. Arriving in Seattle, we’re presented with a very realistic way of going through US customs as JiaJia answers the officer’s questions the best to her English abilities- she’s visiting Seattle (instead of the more glamorous New York) because she’s seen Ephron’s film and wants to find love… or so she says. In reality, JiaJia is in town because she’s pregnant with a rich man’s baby, and due to the particular circumstances of her case, she’s been forced to give birth away from her home.

She’s picked up at the airport and taken care of by a Chinese man named Frank (Wu), who ends up taking her to the house of a Taiwanese woman known as Mrs. Huang (Elaine Jin) who sort of runs a home where other pregnant women are renting rooms.

We could overlook that the marketing for Finding Mr. Right is all about how this is a romantic comedy, even though it’s not much of a romantic tale and it doesn’t get you any butterflies in the stomach. Instead, the movie is sort of a discovery journey for JiaJia, who might look like a naive woman from her introduction but soon becomes the biggest prima donna you’ll ever see on screen- being a kept woman, she seems to be accustomed to get her way and is used to paying people off to get it the way she wants it. She rubs everyone the wrong way, specially her flatmates Zhou Yi (Hai Qing)… and Moon (Mai Hongmei), who is really left cleaning up after their mess. JiaJia is a very unlikable character, challenging for an audience that strongly criticized even the most lovable of lovable actresses as could be Amy Adams on Leap Year. Yet writer and director Xiao Lu Xue gives us a JiaJia that at moments is deeply revealing, especially when she tells Frank (and us) why she’s giving birth in the city, giving us a small view into some of the social problems going on in China. A dash of subversion in a rom-com? Say it ain’t so!

Though Frank’s storyline is all fine in regards of his marital status and his daughter, what really stood out are the small glimpses of Chinese views on modern romance (or love lives), especially with the inclusion of the incredibly surprising Zhou Yi (I didn’t see that one coming) or Mrs. Huang’s daughter and her relationship with a car dealer… who happened to be African-American. Though both of these are brief glances into their lives, their mere inclusion is mind-boggling considering the country of origin.

Eventually, though, by the end of the film, director Xue gives us a decent throw back at Ephron’s film. Too bad it wasn’t an actual romance, huh?