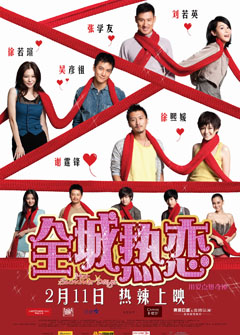 Hong Kong — in a HK/China/USA co-production — tackles intertwined stories of love… a la Love Actually without the Christmas and with an insane summer heat.

It’s the most insufferable summer on that side of the world, as the heat wave melts down buildings, people attempt to fry eggs on their cars, and ice cream becomes a commodity.

Master Chef Soy Sauce (Wu) has opened his sushi restaurant in Hong Kong, where he awaits for the arrival of his other half, the traveling Wasabi (V.Hsu), who is hoping to arrive to the city for the last time.

Air conditioner fixer Ah Wai (Tse) doesn’t get along with his father. He meets rebel-looking Ding Dong (B. Hsu) when they race on their motorbikes against each other in the streets of Hong Kong. Poor Wah (J.Cheung) works between jobs as a taxi driver and a human drinking ice cube, trying to overcome his wife leaving him and his daughter refusing to play the piano because of it.

When an SMS goes wrong, Wah ends up texting Li Yan (Liu), a pianist in Mainland China who’s trying to get a job in an orchestra without much luck. She ends up working at a massage parlor to make ends meet. In the same city, photographer Leslie Guan (Duan) and his assistant Da Fu (Fu) are looking for the model who might have cursed Guan’s eyes. Young Xiao Fang (Jing) spends 100 days of this hot summer trying to win the heart of Xiao Qi (Angelababy).

I think I have covered all my basis. Though the plot in this romantic dramedy is predictable, there are dramatic elements that elevate this above regular romcoms. It’s interesting to note that the most “sophisticated” couple formed by Chef Soy Sauce and Wasabi have possibly the most bland and normal storyline. Both are unable to make a formal relationship because they are both unavailable and playing games. The most “retro” story is the one that carries the most heart, resembling a particular scene in Cinema Paradiso in which Salvatore waited 100 days and 100 nights under Maria’s balcony — of course, he didn’t have to endure the scorching sun.

Which reminds me, Hot Summer Days does take its name and premise to heart by having everyone disgustingly sweaty — not in a Britney Spears I’m a Slave 4 U way, but in that natural way that makes you go Ugh because it truly reminds you of how awful humid hot summers are. Despite all of the gross feelings of summer and its predictability, the film is enjoyable and drives that little poke to the heart when Ah Wai has to deal with his father, as well as a very moving scene with Wah and his non piano playing daughter.

Also, after years of not appearing on screen — despite her cameo in Inglourious Basterds, which got cut — Maggie Cheung makes a cameo ;)