Do you believe in the term “guilty pleasure”?

It’s an audacious statement for people if they actually thought about it. I don’t ever want to try to make someone feel bad for needing to have a guilty pleasure, but what it’s insinuating is that they have such high-brow beliefs in art and it isn’t just that their taste is high-brow, it’s that you would never even consider this “guilty pleasure” in the same conversation. So it’s like a joke. That’s a belief system in “good” or “bad” art and it’s really intense.

Their expectations get so high as to what is actually “good” because of that same mentality that there is “good” and “bad” art and that you can secretly like “bad” art, but only on the weekends. I’m concerned about those people, because I think that’s how you become a hermit, that’s how you become stuck in generation gaps and it’s how you ultimately feel the world is against you.

It’s that you started shutting off, you started to decide what was intellectual and what was pop culture and that somehow the two don’t mix; that you watch a “movie” for fun and a “film” for education. That old school idea, and I love that it happened because it validated movies in the first place, to become films, I don’t think it’s relevant anymore. It had to happen, but that’s from the 60s, we’re not in the 60s anymore.

Filmmakers work within the industry in just as subversive ways as working in the underground, and it would be a shame to ignore that. If you are ignoring television this past decade because you are still going by the 1960s concept that TV, everything on the boob tube, is trash, then you’re actually missing out on some of the best cinema that’s being made. 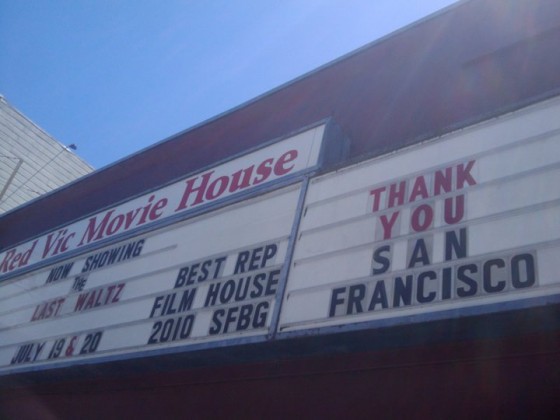 How do you feel about the closing of a rep theater like the Red Vic Movie House? There’s only a handful of rep theaters left in this city, like the Castro Theatre, and nobody goes to them.

It’s scary because we all take the Castro for granted. Working there for six years, it’s like every month that theater might close. No one understands how close it is every single month. You really do have to go out of your way to support businesses, there’s no way the Castro can go [streaming] online, so it’s scary.

I have a very weird feeling about movie theaters right now because, somehow, I do think people have to take them for granted, because they are part of an older generation. I do think that something like the Red Vic, sadly, there was no way to fix it. You know, being a part of the trying to save the theater and doing a couple of events to try to raise money, I realized real fast that it wasn’t just about getting people to come out for one night, it’s a whole mindset in the world right now. 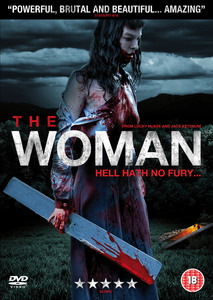 I watch Netflix, I became obsessed with Lucky McKee these last few weeks and watching his new film, The Woman, and to be able to watch two of his films on demand on Netflix — ordering the third one, which is getting delivered today — I’ve been able to go through his whole entire career on Netflix in three days. That’s unbelievable.

As a film fan, I’m not going to pretend that I would wait for someone to do a Lucky McKee retrospective, you know? That’s not the world we live in. I do think the Red Vic had to close. It had been around for thirty years in two different locations, and it’s hard to get out to a theater and spend $9 once a month, much less once a week, much less twice a week. There’s always going to be another theater that needs your support, and that’s not the only way to watch movies.

No matter how much I talk big about the theaters, I watch them at home. I think the movie theaters are actually having to close down, and in my head — this may be very idealistic and naive — but I don’t think that once the theaters are gone, that in five years new ones are going to be built. I think you had to get rid of them first.

I have hopes that that’s what will happen. I’m hoping that movie theaters will pop up in areas where people are actually populated in a way to watch movies. I don’t think Haight St. is anymore. I think Haight St. is a place to shop, it isn’t a place to hang out. I’ll be eating my words in ten years if there are literally no more movie theaters, and there’s no desire to want to be in a theater and have to get sick because someone is coughing or everyone’s texting in their sunglasses, so there’s no way.

I’ll eat all that, that’s fine. I do think that people will always want to congregate to watch something. This weekend is going to be a special thing, to watch the Twin Peaks pilot. No one has ever watched this in public. It’s a TV show and people are going to get to see it in public for the first time on a big screen. The smaller our screens get with phones, the more surreal it will sound to get to watch a movie on the big screen.

When you watch a movie at a festival or even surrounded by people who came to see that movie, it’s like a big group hug. It’s not exactly the same at the big multi-plexes.

When it only plays once, then you have to work around the movie, as opposed to movies working around our schedule. It’s only cinephiles that structure their life around when movies play. I think that’s one reason why MiDNiTES FOR MANiACS has worked. It’s once a month, twice a month and you can only go that day.

A big influence for me is Henri Langlois, who inspired the French New Wavers with his Cinematheque Françiase, and he would have those screenings once and you had to be there. It would be a once in a lifetime experience and if you missed it, he wasn’t going to play it for ten years. There is something about that that I guess has worked. I didn’t mean it to, but people like to come out and see a movie in that group hug with maybe the feeling that it might not happen again.

I definitely have that feeling every time I go to a movie these days. I can’t believe that movie theaters still exist. I am in such an awe that during this time period that it’s not just waiting for a DVD to get mailed to you, it’s that you can stream it or download it whenever you want. Movie theaters shouldn’t even be around

Every movie I get to go to, every midnight I get to go and see, Paranormal Activity 3, I’m taking advantage of that because this is the end of movies being played in a gluttoness fashion, I think. But, like I said, I hope, I hope, I hope that film festivals will always bring people out and that it becomes more of a special occasion, like maybe a play.