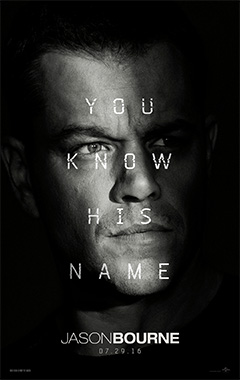 The movie industry is thirsty for intellectual property, willing to remake and revamp any material whether it’s old or fairly new. Their first attempt to renew the Bourne series was done with The Bourne Legacy, which failed to deliver Jeremy Renner with his own trilogy. But since the series is far too broadly liked by mainstream audiences, they’ve brought back ubiquitous Matt Damon in the hopes to reignite the franchise once more.

In Paul Greengrass’ latest Jason Bourne, off the grid ex-asset Bourne (née David Webb, played by a haggard Damon years after The Bourne Ultimatum) meets ex-agent Nicky Parsons (Stiles), who has just hacked the CIA’s database for secret documents on all its assets projects— Bourne’s own, Treadstone, and even a new one called Iron Hand. Discovering that his father may have been involved in his recruitment, Bourne sets out to dig more about his past, the nightmare of current CIA director Robert Dewey (Lee Jones), who is hoping to launch his universal surveillance program alongside Deep Dream, a technological platform that could revolutionize the world.

In a world post-Snowden (2013), where everyone is a little tech-savvy (or seems to think they are), the technical and gadget talk seems to be a bit over-the-top comical— I cringed when cyber-ops head, Heather Lee (Vikander), ordered to use “SQL to disrupt” the hacktivists’ database. And don’t even get me started on the amount of eye-rolls whenever they ask to “enhance” low quality images in any medium. However, for all the lacking qualities of Vikander’s on-screen belonging with the rest of the team (she does seem a tad young in the room, and her accent doesn’t quite fit in a CIA room, no?), I did enjoy her misplaced millennial hunger for power. My favorite scene of hers was actually her brief verbal exchange with Riz Ahmed, who plays the founder of Deep Dream.

However, the series’ strong point has always been its hand to hand combat scenes, despite Greengrass’ signature dizzy shaky-cam, and its chasing sequences across cities. The amount of direct contact feels quite reduced, as we make a point that laconic Jason Bourne can knock out an adult man with just one punch, the only prominent fight happens near the end with a tired Vincent Cassel, after the movie’s highlight scene— the chase across Las Vegas.

Was this story necessary? Probably not, but it opens up the opportunity for more entries in the franchise, and that’s what Universal (and China’s Perfect World Pictures) wouldn’t mind. One thing learned is that someone pickpockets you at a convention, it’s probably not a common thief, but Jason Bourne.

Extra quarter of star because of that SWAT truck ramming through The Strip. LOL