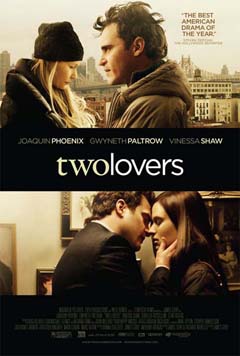 I had watched Two Lovers back in 2008 when it was doing its festival rounds, and I remember liking it. To my surprise, however, when I decided to watch it again over the weekend, I didn’t remember a detail of it. It was like I was watching a completely new film. Maybe it’s that experience of watching it with new eyes or being four years older — it gives you a new perspective of the film.

Though Joaquin Phoenix was overlooked for his understated performance in here due to his shenanigans that resulted in the eyebrow-raising I’m Still Here, antics that also resulted in overshadowing a fine film, co-star Gwyneth managed to, at least, nab a Best Lead Actress at the Spirit Awards that season. The best thing, however, is writer director James Gray’s greatest achievement: a great character study.

Phoenix plays Leonard, a deeply troubled man who has been on the verge of suicide a number of times due to his failed engagement and bipolar disorder. In his mid-30s, he’s back at home with his parents — which includes a worrisome Isabella Rossellini — and working at his father’s dry-cleaning company, which is on its way for a merger with the Cohen’s dry-cleaning business. In an attempt to help their kid be happy, Leonard’s parents set him up with the Cohen’s daughter, homely Sandra (Shaw), in the hopes that both families could be one.

Until Michelle (Paltrow), the Shiksa, arrives and makes Leonard’s butterflies flutter like he hadn’t felt since his fiancée left him. Unlike Sandra, who spends a lot of time around her family and her family’s business helping out as best as the girl-next-door’s image that she represents, Michelle likes to party, does drugs, is quite high-maintenance, and to top it all, is involved with a married man. But the heart (or something else) wants what it wants.

Through the course of Two Lovers we see Leonard trying to juggle both of these relationships in his life, and it’s devastating. Phoenix plays Leonard with a fine veil of sympathy, even if the character lacks the maturity (and charisma?) to make you root for him, but it’s all real. As a dormant individual, who has been going through life as a ghost, barely living, to going as far as bailing on someone without even a phone call and ditching his parents’ deal (which could have potentially not only ruined the business, but also a friendship), all under the approval of his mother because “they only wanted him to be happy.” If he had been Chinese, he’d have been slapped across the cheek for being selfish. However, Two Lovers doesn’t judge Leonard, but asks us as viewers whether our own happiness is worth more than the other’s. Whether we would choose the woman we want or settle for the one that wants us. The answer seems simple — I’ll go for the one I want, but if in the process I hurt someone? Is my happiness worth her pain?

Throughout the film, Gray uses warm and earthy tones when showing us Leonard scenes with Sandra — she’s the ideal girl, which explains a lot of comments online siding with her and labeling Leonard as a jerk for his deceit. Plus, it doesn’t hurt that Vinessa Shaw looks amazing in here, striking a fine line with not being needy, despite our never understanding her attraction to Leonard. Most of the audience could immediately fall in love with her, unlike Michelle who just smells like trouble from the moment you meet her, her surrounding cool color palette, and issues.

The different interpretations of the ending — is he happy??? Is he sad??? Did he settle in a loveless marriage? — makes Two Lovers worth the ride. It’s depressing, heartbreaking, it’s beautiful- all combined. But why did he have to use the ring? Despite the air of mystery surrounding her character, Sandra probably deserves better.