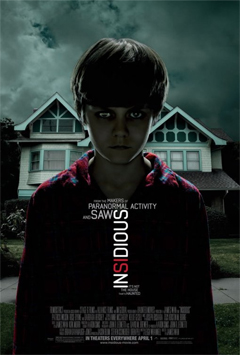 Insidious holds a simple meaning – seemingly harmless with grave effect. It makes a perfectly fitting title for James Wan’s latest film, which was a refreshing horror film in a decade where every release seems to be a remake or slasher flick.

The film begins with Josh and Renai Lambert (Wilson & Byrne), as well as their three children, moving into what seems to be a quaint and lovely home where they can live in peace as a family. They have a happy and healthy relationship and the move seems to be going along fine, aside from certain sounds from the attic and a few mysteriously moving objects. Once Dalton (Simpkins) heads upstairs to investigate these noises, things coincidentally start to go wrong. A piercing scream due to something unknown send Renai and Josh running up to find their son on the floor, seemingly alright, and under the assumption that he just bumped his head after falling off a ladder. However, when Josh attempts to wake him the next morning, he remains perfectly still. When rushed to the hospital, the doctors advise the Lambert family that he is in a coma that cannot be explained by any of their testing.

Many disturbing events begin to unfold and Renai confronts Josh about them with no success of convincing her skeptical husband. After being terrified by a mysterious man in their child’s bedroom that only she saw, Renai is able to convince her husband to move from this house and into a new one. While Josh remains doubtful of his wife’s visions, his mother Lorraine (Hershey) believes her and decides to contact an old friend of hers, Elise Reiner (Shaye), that has dealt with paranormal activity many times before. With her help, the frightening events are explained to be the doing of a demonic man with a red face and black claws, as well as the fact that Dalton has the ability to astral project. Due to his unique ability, he can wander around the world of the spirits – but he now remains separated from his body and trapped in “The Further” while his family struggles to prevent the evil spirits from taking over their son’s body and save their son from a dark fate.

James Wan – best known for directing the first installment of Saw – does a wonderful job instilling an air of mystery from the start. Instead of relying on cheap cues for scares with intense music, he uses silence as his friend, only allowing Joseph Bishara’s score to enhance the dark mood in certain scenes. Wan knows how to work an audience without having to resort to gore or cheap gimmicks. It can be haunting by just reminding us that true fear lies in the unknown – in the fact that we never know what can truly frighten us. It isn’t until the climactic final events begin to unfold that the tension begins to lose momentum and plenty of the mysterious aspects of the film fade away – leaving us with a few laughable scenes towards the end and feeling a bit too reminiscent of Hooper’s Poltergeist at moments.

Patrick Wilson and Rose Byrne are both very convincing as the troubled parents, overwhelmed with concern and fear for their lives, and more importantly their child. Hershey also does a great job – following up her magnificent role in Black Swan with another worried mother figure. Lin Shaye – who has been featured in many horror films in the past – does wonderfully at commanding the focus of the camera and the attention of audiences in whichever scene she’s in, helping to progress the storyline and add to the mystifying nature of the spirit world.

Although the final acts of the film don’t particularly live up to the fear and mystery that the first half established, James Wan’s use of simple techniques that haunted house movies have used for decades, and his impressive work with a small budget, make Insidious a horror film worth watching.