The Fangirly Diary of a Geek Girl: Weekly comics on your TV!

Gotham (the new Batman without Batman TV series!) was totally ordered to series by Fox. Here’s the trailer of Gotham and it looks pretty good!

Here’s the new banner for X-Men: Days of Future Past, which is basically the whole mutant cast photoshopped into being altogether for the picture~

Late Night Tales is a music compilation that also features Benedict Cumberbatch reading the last part of the ‘Flat of Angles’ short story.

We’ve got a new film, Guardians of the Galaxy coming out August 1 in the United States this summer, which we’ve seen, I mentioned in my comments. We feel quite good about that too. That’s a whole other Marvel realm or universe in terms of where it takes place, the characters that populate it and the stories that you can tell for those characters. So, I think, I’m not going to predict that we’ve got another Avengers on our hands, but that’s certainly the goal.

Bob Iger also said he ain’t changing Captain America 3 release date. Suck it, Batman vs. Superman! Anyway, here’s an article talking about the possible scenarios reggarding this clash of titans of geeky proportions! The writer thinks is very unlike to happen, and probably one of them will be kicked either to the first weekend of April or to July.

Torrilla posted like dozen pictures of the four main characters of Guillermo del Toro’s Crimson Peak. That is Tom Hiddleston, Jessica Chastain, Charlie Hunnam and Mia Wasikowska~ Gotta say the four look fantastic, even if I was a bit initially miffed that they were obviously color-coded. But in Guillermo, I trust! 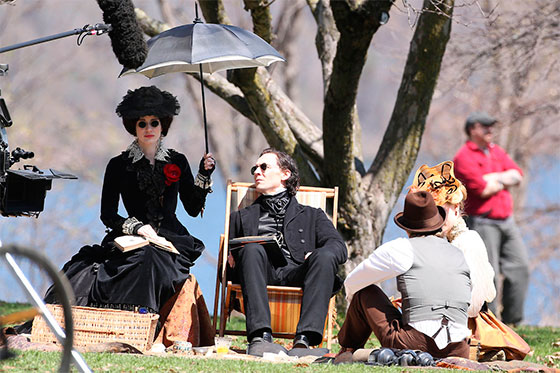 I mentioned ages ago that Ian McKellen was going to be an old Sherlock Holmes in A Slight Trick of the Mind. Now Laura Linney will join the cast as Holmes’ housekeeper Mrs. Munro. And I am glad because Laura is a huge Holmes nerd or Sherlockian!

Couldn’t have happened to a better person! I still feel a bit sad about the movie and it hasn’t premiered yet. Specially because an aging Sherlock Holmes with dementia must be a painful thing to watch, and there’s still no mention to poor Dr. John Watson! Is he even alive?

In a parallel world, NBC greenlighted The Walking Dead. But it would have probably been quite different, according to Robert Kirkman~

[The Walking Dead] actually did almost get made at NBC. It didn’t get made because when the pilot was turned in, the famous story is one of the executives said, ‘This is awesome. I really love this. Does it have to have zombies in it?

Yep, NBC wanted The Walking Dead with no zombies. Because that makes total sense! Of course, Kirkman et al thought that was dumb, I mean why would it even be called The Walking Dead, and decided against allowing a network to air the show. Thankfully, all ended well and they found a nice home at AMC.

Matt Smith apparently knows the plot of the next season of Doctor Who. And it is so awesome he’s jealous of Capaldi~

I rang Steven Moffat up the other day and found out everything about the new series. It sounds really good! I was really jealous actually.