The Fangirly Diary of a Geek Girl: Weekly comics on your TV!

Greetings, my fellow geeks! Among the many news this week, we have annoucements of TV show renewals and of course many new series order. And you know what? We will get tons of comicbook adaptations for TV! But let’s beging with this!

The release date of Godzilla is getting closer each day, and now we have lots of new clips and even some behind-the-scenes footage. Movie still looks great! Hope it is!

Here’s some talk about the FX process of transforming Hayley Atwell into “Old Peggy” for Captain America: The Winter Soldier. Seems like a complicated yet awesome project!

I wanted to take the performance of the elderly woman that we had shot in a rig with eight cameras and project the skin onto the original Hayley footage that had been shot on set. We took a still frame of the skin and tracked it onto the original photography, and it looked so good. The way we did it – it was amazing – you could still see Hayley, her eyes, her mouth, her underlying structure, but we just lifted the creases and cracks and age from the elderly woman and transposed it onto Hayley’s young face.

May The 4th Be With You! As promised we got the first full trailer of Star Wars: Rebels. And we also got a smaller one of only 30-seconds~

As we all know, Hugh Jackman ain’t getting younger, and geeks are always overthinking stuff. Here’s an article about how Fox could make do without Hugh Jackman as Wolverine. The options? Recast, reboot, other X-Men solo movies NOT about Wolverine, spin-offs, and finally X-Men movies without Wolverine because he may be an attention whore but there are tons of X-Men who can team-up.

So, The Hobbit‘s last movie got a name change, we all know that. And here’s what Luke Evans thinks about it (he totally agrees)~

I actually think it’s absolutely right because when it was two films There and Back Again would’ve been the second film’s title. Now it’s three films it’s become redundant…We have the Battle of the Five Armies which we focus on, it’s a very important part of the story. I think it’s right, I think it’s appropriate that it’s changed and I think Peter [Jackson] would’ve thought about it with a lot of care. I think the decision’s right – when you see the film you’ll understand exactly why.

Man, poor The Amazing Spider-Man 2. It totally didn’t get as much money as they hoped so. In fact, it will barely top its predecessor. And thus, Captain America: The Winter Soldier remains the best superhero movie of this year yet! That’s gotta sting. I mean, no offense to Cap, but Spidey has always been more popular than him.

Aaron Taylor-Johnson had some doubts before joining Avengers: Age of Ultron as Quicksilver? The reason? Why was his character (or Elizabeth Olsen’s BTW) was needed considering it was already full of superheroes. He did come around so yay!

You know, you’ve got five of the most awesome super heroes, ten I suppose, there are about ten Avengers now, and they are all movie stars. You’ve got such a huge cast, what the hell difference is it going to make if I come on the scene? So it was the character and that took about a year of going back and forth about it. It took a while but I’m super happy to be in that one.

Here’s and IMAX poster, as well as some character posters, from Maleficent. Some work better than others but they still look good. 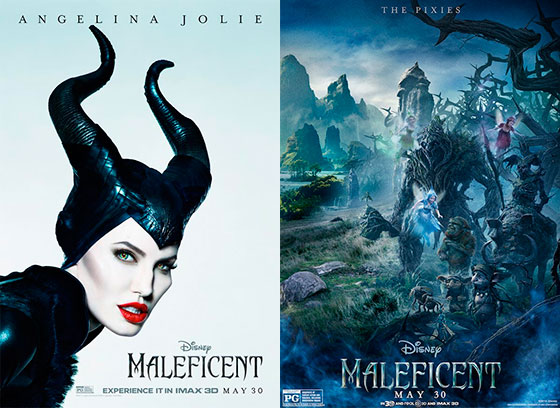 Here’s a late interview with Hiddles about that Tinkerbell movie he was in called The Pirate Fairy. He talks about what being Hook meant to him. Apropos of it being on cinemas near me. I would have gone to watch that movie with no shame if had it come with subtitles.~

As a child, I loved the story of Neverland. I used to watch Peter Pan and I loved the story of the Lost Boys and the pirates, as well as Tinker Bell and Wendy. I loved all that stuff. Never in my wildest dreams would I have imagined that I would one day be an actor called upon to play a role in a movie like this. It’s amazing. It’s a huge, huge honour. I feel so proud and happy.