The Assembling a Universe showed us a first look of Scarlet Witch and Quicksilver in the form of concept art. I suspect this is the look before they get costumes~ 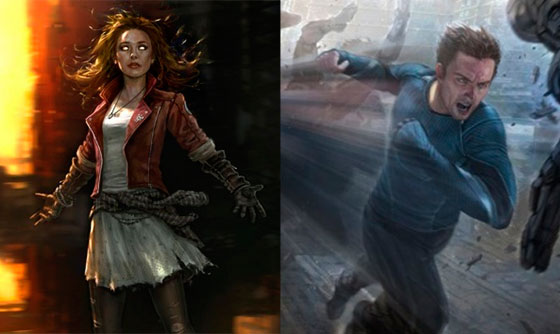 In the documentary, we also learned that Marvel could release up to four movies a year if things go better than expected. Damn. As much as I love Marvel, four movies a year is a bit much. I’m ok with three though if they add women and POC… I’m still waiting for Captain Marvel and Black Panther, Marvel!

What I think is more likely – if [knocks on wood-like table] the next group of movies work and people want to see additional stories – we’ll have too many franchises and you can’t do one of each franchise every two or three years. We’d have to move to three a year, but that would have to be a natural move if it were to occur. We’d have a [script] draft, we’d have a filmmaker, we’d have a character the audience wants to see – let’s slot in a place for a third one. Or a fourth one.

Scarlett Johansson is teasing Black Widow’s character development in Captain America: The Winter Soldier and how it could play in the next Marvel movies~

It’s not until the series of circumstances, as the plot unfolds, we find both Steve and Natasha questioning their own identities. They were pretty strong people with their beliefs or whatever twisted morals they had, maybe the Widow’s more than Cap’s. In some ways there’s kind of a cliffhanger because you really see that they’re just trusting the wave of having this huge moment of self-discovery. Hopefully, we’ll be able to track where that goes in the next installments.

Because we geeks love to speculate, here’s a list of the Star Wars Expanded Universe (SWEU) character that could end up in Star Wars Episode VII, because there’s been lots of rumors of castings and no one has been officially announced yet, that and because some people have time to do things like this. Lucky them~ As someone who admitedly does not know much of SWEU, I’m finding many of this choices interesting!

So Universal Pictures is making an action movie of The Little Mermaid, because all of you who complained about too many Superhero movies, can now bask in too many live-action fairy tale stories that were first Disney animated movies. Yay! OK, this movie was in pre production before, and had Joe Wright as a possible director until he decided to jump ship and do racist Peter Pan instead. Now we have Sofia Coppola as director! This might again spark the fake rumors of Emma Watson as the titular character, since both women worked together in The Bling Ring, because that’s how geeks roll!

Tywin Lannister narrates a feature detailing the history of the Game of Thrones as a TV show~ Yep, Charles Dance should just narrate everything from now on…

Here’s the trailer of the new Fargo miniseries. I’m not entirely convinced with Martin Freeman’s accent but I will give it try~

Benedict Cumberbatch will host the Laureus Sports Awards. I didn’t even know those awards existed, even if it’s “the premier honours event on the international sporting calendar”. Now I’ll have to watch them though! Benny Batch’s words about his upcoming hosting are both endearing and ridiculous~

I am a big sports enthusiast and I am delighted to be able to host such an important event in the sporting year. I have seen the names of all the great sportsmen and women who have been nominated for the Laureus Awards this year and, although I played a great detective in Sherlock, I have to confess I have no idea who is going to win. They all seem to have achieved so much. But it will be great to be part of such a special event.

And on totally geeky news! Tumblr will hosts its first  ever Loki Week! The hell is that, I heard you ask?

The event, which will take place on the last week of March, is a formal celebration of Marvel’s beloved character Loki. Our aim is to bring together all the different fans and to form a peaceful community in which we can all do what we love doing most: appreciating Loki, may it be comic Loki or MCU Loki! You can post edits, gifs, fanarts, fanvideos, meta… basically anything goes as long as you make it yourself or have the permission of the original creator to post it.

It’s this moments of mixed emotions (elation and embarrassment) that made me happy I chose this path of fangirlhood (it is a word if I say it is!)~