So there were some celebrities talking at the Democratic National Convention, and let me tell you it was more interesting than the VMAs. So, Eva Longoria, Scarlett Johansson, and Kerry Washington all spoke, but it was Eva Longoria’s speech that was made of awesome. I specially loved this part:

BTW, if you didn’t notice, Google had a new doodle to celebrate the 46th anniversary of Star Trek: The Original Series. In honor of that, EW talked with the man responsible for that particular doodle, Ryan Germick:

For me, it was a vision for the future. I think it was also that it was multicultural, pro-science, and full of curiosity and passion. I think like a lot of good science-fiction, it sort of says a lot about its present era. We can really appreciate what Star Trek did in its time.

Oh dude! Al Pacino, Christopher Walken and Alan Arkin will be together in a comedy! A crime comedy! I must watch Stand Up Guys.

Talking about awesome older actors, now with more British accents, here’s the international posters of Gambit that will feature my favs Alan Rickman and Colin Firth. Oh yeah, Cameron Diaz is in there too. Oh well, nothing is perfect.

Yay, Daniel Craig will be in at least two more Bond movies after Skyfall! What? I do like his Bond! Better than Brosnan’s, for sure.

There’s also lots of info about Robot Chiken‘s upcoming DC Comics Special. IGN talked with writer Kevin Shinick (who also does voice work) and Seth Green was on Conan talking about it too (and making fun of poor Aquaman).

In DC Comics related news, do you remember NBC tried to make a new Wonder Woman series but the pilot apparently sucked so much it never even aired? Now CW wants their own try, and their version of Wonder Woman will be an origin series ala Smallville. Could it work?

And more pics of Thor-Villa! They have to hurry up because filming started today! Well, it was at Shepperton Studios but still! The sets of Thor-villa will involve 300 extras and a battle between two kingdoms, where Thor saves the day! At least I hope he does~

Now, it’s time to talk about Project Wendy. Some time ago, Tom Hiddleston did a hilarious sketch on MTV After Hours, called “Loki’d”, and in there he took on the persona of delivery man Steve, who had a moustache called Wendy. Flahsforward, and the Hiddlestoners decided to create a worldwide project where fans will share a pic of them with the “Wendy” moustache and share it on Twitter with the hashtag Project Wendy. While it did not become a worldwide trend, it trended in the US, UK and, for some reason, Jotunheim. LOL.

Josh Horowitz, host of MTV After Hours, tweeted to Hiddles about it. And the lovely man was so pleased he decided to participate too! 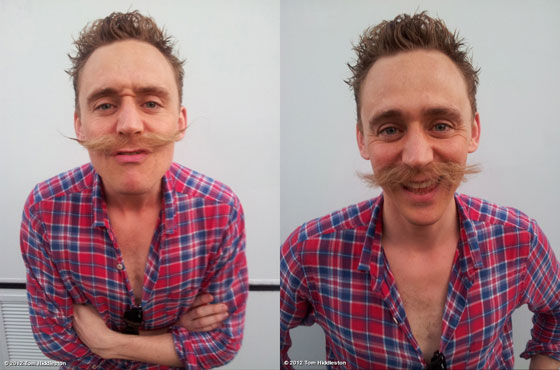 #ProjectWendy is hilarious and insane and foolish and wonderful. You guys. Way to make a man feel great.

Sometimes I just can’t with this man. For real!

Finally, did you know there were tons of Disney songs that never made it out of the cutting room? Here’s a list of some favourites.

And that’s it for the week, but before I go watch Doctor Who, here’s the lovely new episode of Super Therapy:

By lovely I mean funny as hell, of course~