Michael Fassbender sure is bussy. Now he’ll play a pop star as the titular character in Frank, with Domhnall Gleeson, you know Bill Weasley. BTW, Fassy also got the Actor of the Year Award in GQ magazine~

New Doctor Who teaser of this Saturday’s epidose. And apparently Queen Nefertiti also wants a piece of The Doctor:

It was bigger.  It was bolder, I think, than the first one, and that was pretty big and bold from my stand point. I’m really excited to see what they do with it.

I am really excited too, Quinto.

More pictures of Thor-Villa because you can never ever have enough. Besides there are new props!

Miles Morales gets Peter Parker’s webshooters! Miles Morales is the current Spider-Man in the Ultimate Universe, btw. And there’s a lot of talk about what this means for him and the future of Ultimate Spider-Man, with Miles fighting classic Spider-Man foes and maybe a love interest. But what stood out for me was this:

Cap is a huge guy. Thor is even bigger. Iron Man is also a big guy once Tony is armored up. And Miles is a 13-year-old who’s maybe scraping five feet now. So I think that visual contrast is really interesting

Yes! Yes it is! One of the reasons I loved Spider-Men (when regular Peter Parker somehow gets sucked into Ultimate universe) was seeing the size differences between Peter and Miles. And now watching him with the huge guys is kinda awesome… size differences are a fetish of mine, don’t judge!

So yeah, there’s this rumour that Viggo Mortensen could be Doctor Strange in Thor: The Dark World. I know it’s just a rumour but know that I’ve heard it I f*cking want it so much.

And then, the saddest new ever: the lawsuit because of the briefcase delays Marvel’s ‘Phase One’ box set until next spring. Brb, crying my fangirl heart out.

I’ll just have to comfort myself with interesting info on The Avenger VFX, that includes the fact that Hulk has no penis and Iron Man can fly like a pretty ballerina now~

We also have Clark Gregg talking about his Coulson feels:

I was pretty sad when they told me. Coulson is a real person to me, he’s part of me. People were very upset. I was in some screenings early on, just in the back and people would gasp and speak to the screen.

Yeah, I was one of those who almost snivelled over Coulson’s fate.

Benedict Cumberbatch and Stephen Hawking is what I needed in my life: 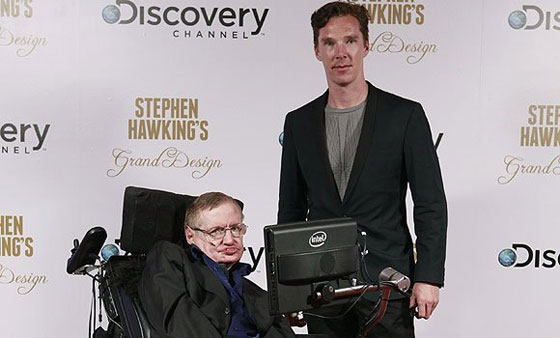 Yup, my Posh Alien Prince was at the premiere of Professor Stephen Hawking’s new documentary series, Stephen Hawking’s Grand Design. Why? Well, Benny seems to have a great working relationship with the Professor, and not only has he played him in the movie Hawking, but he also has narrated some of his other documentaries, including this new one.