The Fangirly Diary of a Geek Girl: No longer Strange!

Greetings, my fellow geeks! This week we have many great news to keep away the sting of having to wait six month for more Outlander, and that includes the first issue of the certain comicbook, and of course some important casting news! But before that, check this out:

First, the weekly Doctor Who promo! But before that, let me tell you that this week episode was good! I’m liking Capaldi’s Doctor so much! But what’s with that Eleven look alike, Moffat! Just let him go! So anyway, here’s the promo for episode 7, “Kill The Moon”. I am getting serious Alien/Prometheus vibes!

So yeah, Outlander is gone until April, and here are some interview to entertain myself while I suffer from withdrawal~ First, one with showrunner Ronald D. Moore, where he talks about “Both Sides Now” where things happened a tad different than from the book. No complains for me tho!

We try to honor the book, and we try to preserve the spirit of it, and we try to stick as close to the storyline as we can, but it is an adaptation, and we are adapting it for another medium. It has different requirements, so we embellish on things and we change things around, but we’re always at pains to get back to where the story goes.

And here’s a small promo which teases the rest of the episodes that await for us on April 4th.

In other news, the trailer of Avengers: Age of Ultron will run with Christopher Nolan’s Interstellar! So, I guess we are waiting until November 7th? Probably a few days earlier since trailers always find their way on the internet before.

It’s official, Guardians of the Galaxy has just earned more than MCU launcher, Iron Man! As well as the first Transformers and the first Harry Potter movie. Congrats, you bunch of a-holes. Not bad for a movie that was thought to be Marvel’s first fail by people of little faith~

In DC news, the extended synopsis for The Flash‘s pilot talks aboutBarry Allen’s time-travelling powers. Well, they don’t play, do they? Implying the big guns, already! This is the part in question:

Concealing his identity behind his incredible velocity, Barry can not only accomplish feats faster than human comprehension, but also taps into an energy that allows him to access moments out of time — both past and future.

LOL, Oscar Isaac, who will be in Star Wars: Episode VII, wished George Lucas never tweaked the original trilogy. Like a proper nerd. As an artists, he like totally gets it tho!

As an artist, like, he made the shit, so why can’t he do whatever the heck he wants with it. There’s a part of me that appreciates that he doesn’t really care if people are upset about it. He decided to share it with all of it and he wants to go back and do stuff, whatever. But as a fan, I’d much rather go back and watch the old thing, because it’s a product of the time. It’s what did you do at the time with the things that you had. And that’s what made that movie so amazing.

Behold! The first appareance of female Thor in the Thor #1 preview! Regular old Thor being all sad because Mjolnir doesn’t like him anymore, and said hammer corrects the pronouns on its inscription! 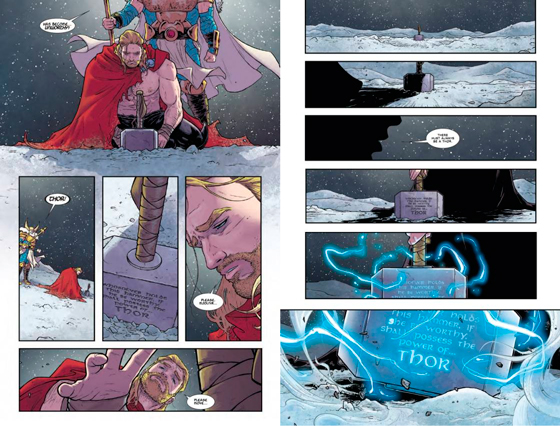 CW President Mark Pedowitz is happy with Arrow and The Flash, and is giddy to mention that those easter eggs we find might in either show might develop in more spin-offs, which is something that was mentioned before about the other DC shows from other networks. Could they even crossover in Titans and Supergirl? Even if they won’t be in CW? Gotham and Costantine are no tho!

What you’ll see in Flash and Arrow is that we’ll have the ability to test characters out. Is there room to grow them into the next show? I cannot tell you yet. There are discussions going on.