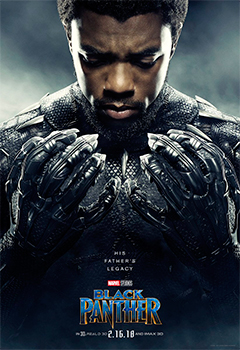 With Black Panther becoming a success in so many levels, it seems the MCU can do no wrong.

The story continues where we left T’Challa, a.k.a. Black Panther, in Captain America: Civil War. King T’Chaka is dead, and after leaving Zemo in jail, T’Challa has to return to Wakanda to take the mantle of king. Things won’t run smoothly, as black market arms dealer, and Wakanda’s old pain in the back, Ulysses Klaue returns to make shady deals with vibranium, Marvel’s most amazing metal and Wakanda’s main resource. But he ain’t alone, and this new partner Erik “Killmonger” Stevens would prove himself to be a worse threat for T’Challa and the whole of Wakanda.

Yes, the whole of Wakanda. Black Panther is not about just the titular character, but about the whole country. That’s to be expected when the titular character is not just a superhero but a king. From the beginning of the film, we are given the backstory of this new and amazing place, that reminded be of the prologue of The Lord of The Rings, and then we see its current state, showing it as a country so technologically advanced that it looks like Star Wars, hidden under the facade of a third-world country.

Black Panther is also about Wakanda’s people, and damn if almost all named characters were interesting! And the cast is up to par! In fact, poor Boseman may have been upstaged in parts, through no fault of his own, because everyone was simply amazing, and his character is very dignified but a bit dull. Until things go south in Wakanda and, of course, his character development soars!

And yes Killmonger (Jordan) is one of the most compelling and complex Marvel villains. Up to the point that you are nodding along with him, even if you find his actions distasteful and horrible. You understand where he’s coming from; and when he throws Wakanda’s mistakes in its face, every character, and specially T’Challa, will have to look within and become a better king.

Then there’s the amazing women of Wakanda, all of them magnificent, from super spy and T’Challa’s ex Nakia (Nyong’o), kick-ass the head of the Dora Milaje Okoye (Gurira), Queen Mother Ramond (Bassett), and my favourite Disney Princess and T’Challa’s Q Shuri (Wright). Their personal relationships with T’Challa were varied and endearing, helping to humanize his character, but also make them interesting on their own, making you want more of them.

Rounding up the Wakandans, we have T’Challa’s best friend W’Kabi, a very different role for Kaluuya since we saw him in Get Out; and Zuri, keeper of the heart-shaped herb that gives you Black Panther powers, which continues with Whitaker’s roles of elder advisors/mentors.

Ross (Freeman), one of the two main white characters, was there to be the MCU connection and also for the role of the outsider that falls in love with the country. Klaue (Serkis) returned wilder than ever, and it seems that replacing his lost arm with some crazy Wakandan tech made him up the ante.

Now someone I didn’t expect to love so much was newcomer Duke as M’Baku, leader of an opposing tribe and an honorable warrior. Also, possessor of flawless comedic timing.

Yes, we know even the more serious MCU movies have humor, but here it was used in the best way, without taking from the drama and letting the grim moments breath.

As for the rest of elements, it’s consistent with to the quality we are used to in the MCU movies. The action scenes were good, with the highlight, being the casino scene and the subsequent car chase that reminds us of Bond movies. And both those moments, the music was an integral part, both Ludwig Göransson’s score, heavily inspired by Senegal and South Africa music, and the Kendrick Lamar produced soundtrack for a more modern sound.

The only gripe found in the movie is some dodgy CGI, noted specially in that final battle between Black Panther and Killmonger, and that they seem to have the one street in Wakanda for when they shot the protagonists walking around the city. Both would have been unforgivable with this kind of blockbuster, but the other elements are so great that they don’t diminish the movie much.

We have two after credit scenes in this one. The first one could have easily been at the end of the movie, and relates to the relationship that Wakanda will have with the rest of the world. The other one is related to a certain character who was left in Wakanda, seen in the mid-credits scene of Captain America: Civil War.