The Fangirly Diary of a Geek Girl: Merc with a Mouth!

Greetings, my fellow geeks! We have good news with new comicbook TV series stuff, as well as some confirmed and possible release dates. But most importantly, one long awaited geeky movie is out of development hell! Here’s how the week started:

After the best (and creepiest) episode of Doctor Who Series 8 yet, here’s the promo of the fifth one “Time Heist”! It looks pretty neat!

I will continue giving the good Guardian of the Galaxy box office news! It has reached $300 millions in the US (making it the highest grossing release of 2014), and also internationally, which means $600 millions worldwide! Congrats to the movie that some faithless heathens though won’t reach $300 millions worldwide! Also, come on, China, make it reach the $700 millions! I still haven’t forgiven you for Transformers: Age of Extinction!

Making Star Wars has had some Star Wars scoops and pictures, and now they have revived the Obi-Wan spin-off movie rumor~

For the spin-off movies they were initially going to stay away from any Jedi or Sith characters. But I’m hearing now that because of the popularity of Obi-Wan (fans recently voting for him on the official website etc) that an art team is now working with a writer on concepts for an Obi-Wan movie.

Here are a couple of Tusk posters! Yes, I am enthusiastic about that movie and I like those minimalist posters, ok? 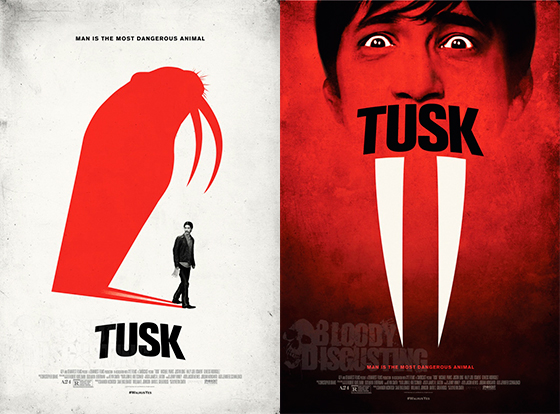 The Toronto International Film Festival is over! And the People’s Choice Award winner is The Imitation Game! Congrats to all the people that made it happen, and I hope to see that movie soon!

Here’s Stan Lee being the voice of reason to all the time fanboys and fangirls freak out with every little change in their comicbooks and other comicbook based media:

You see, when you have a comic book company, you’re publishing so many books every month, and it’s month after month after month, and you want to keep the readers. And when you have movies you have one movie after the other, just like the James Bond movie every couple of years. And you have these conferences and you say, ‘What can I do that will surprise the fans and make them want to learn more about the characters?’

Here’s an article about the brutal whipping scene in this week episode of Outlander. Man, it was gruesome. Also, Tobias Menzies did a great job at being that evil asshole Black Jack Randall!

This is a man who is curious about boundaries, about the limitations of the human frame, and there’s something oddly scientific about his gaze. He’s come up against someone as stubborn as he is, and there’s something exciting about meeting an immovable force,” Menzies said. “And that significance had to happen non-verbally, in the physicality of it.

The Hobbit: The Battle of the Five has a new epic banner that depicts most of the key scenes and characters in the movie. Here’s my favourite part of the whole huge thing:

Also released was the official plot synopsis of Avengers: Age of Ultron, that doesn’t reveal anything we didn’t know, except maybe a hint that possibly Ant-Man’s contribution to the creation of Ultron might be mentioned… I mean the part of “dormant peacekeeping program”, as in Tony Stark maybe isn’t creating Ultron from scratch~

When Tony Stark tries to jumpstart a dormant peacekeeping program, things go awry and Earth’s Mightiest Heroes, including Iron Man, Captain America, Thor, The Incredible Hulk, Black Widow and Hawkeye, are put to the ultimate test as the fate of the planet hangs in the balance. As the villainous Ultron emerges, it is up to The Avengers to stop him from enacting his terrible plans, and soon uneasy alliances and unexpected action pave the way for an epic and unique global adventure.

You know that 24th James Bond movie? It starts shooting on December 6th! Yes, all the gang from Daniel Craig to director Sam Mendes are back! Except Dame Judi Dench because she kinda died in the last movie~

And talking about secret agents, guess who’s coming back? Why, it’s Matt Damon for another Jason Bourne movie! And he will be reunited with director Paul Greengrass! The idea is to have it ready for July 16, 2016. And what does that mean for the spin-off sequel with Jeremy Renner that Justin Lin was going to direct? That will still get made. Only later~