Chris Hemsworth did some press this week. First, trying to break my heart like Anakin did to Padme by reminding me his contract (and practically everybody else’s) is coming to an end. Yep, he’s finished playing Thor… for now. He did say he’s discussed this with Marvel president Kevin Feige during the filming of Avengers: Infinity War, but they were busy and that “it’s a conversation for further down the road, if it was going to happen”. Chris also described said film as historic and teased a 76 member cast:

This is one of the biggest things in film history and to be a part of it was just incredible. I think what these characters are about to face — with Thanos — there’s been nothing quite like it. There are 76 cast members or something like that. I think what people are going to be excited about is what I was excited about and that’s Thor meeting the Guardians and Iron Man meeting Doctor Strange.

Well damn, Jumanji: Welcome to the Jungle has beaten Justice League at the worldwide box office, $666.17 to $654.4. Well, that’s embarrassing. I’m still surprised at how well the Jumanji sequel has done, both with the critics and the public!

So yes, it’s a fact. Star Wars: The Last Jedi bombed in China, and it “has already been completely pulled from cinemas here”. The Hollywood Reporter ran an article with an analysis of what happened. In short, the numbers are blamed on the original Star Wars movies never being released in China and younger moviegoers there having no real interest in the franchise. The Force Awakens benefited from the curiosity about the Star Wars brand, while Rogue One had some excitement with the well received performances of Donnie Yen and Jiang Wen. The Last Jedi had neither of these factors going for it. It now remains to be seen whether Disney will even bother releasing Solo: A Star Wars Story or Episode IX in the country.

Board the Millennium Falcon and journey to a galaxy far, far away in Solo: A Star Wars Story, an all-new adventure with the most beloved scoundrel in the galaxy. Through a series of daring escapades deep within a dark and dangerous criminal underworld, Han Solo meets his mighty future copilot Chewbacca and encounters the notorious gambler Lando Calrissian, in a journey that will set the course for one of the Star Wars saga’s most unlikely heroes.

Another official synopsis that appeared this week was the one for Incredibles 2:

Everyone’s favorite family of superheroes is back in Incredibles 2 – but this time Helen is in the spotlight, leaving Bob at home with Violet and Dash to navigate the day-to-day heroics of “normal” life/ It’s a tough transition for every one, made tougher by the fact that the family is still unaware of baby Jack-Jack’s emerging superpowers. When a new villain hatches a brilliant and dangerous plot, the family and Frozone must find a way to work together again – which is easier said than done, even when they’re all Incredible.

Empire magazine shared some new images from upcoming movies. First, a concept art from Ralph Breaks The Internet: Wreck-It Ralph 2, that premieres on November 21. Then, a new image from Ant-Man And The Wasp, with both heroes suited up and ready for their July 6 premiere. And finally a new look of New Scamander from Fantastic Beasts: The Crimes of Grindelwald. 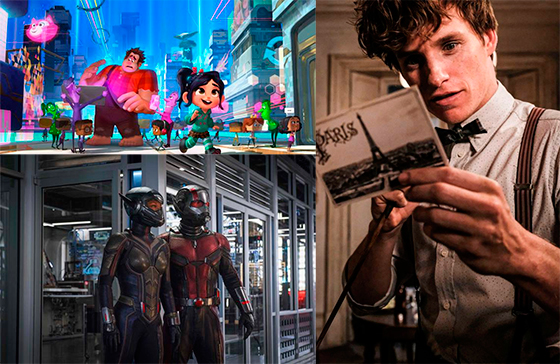 Talking about that last film, apparently all 5 Fantastic Beasts movies will be set in different cities! David Yates already confirmed it was J.K. Rowling’s plan all along:

Jo’s already told us where the next one is taking place. It’s very exciting. This is a global story, ultimately. And given that there’s a global audience for this, it’s all the more delightful to take the story to different parts of the world.